Aidan O’Brien’s Serpentine could be supplemented for the Arc 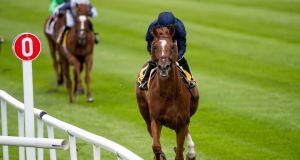 Serpentine could be supplemented for next week’s Arc. Photograph: Morgan Treacy/Inpho

The star filly Love could be joined by her Derby winning stable companion Serpentine when Aidan O’Brien pursues a third success in this Sunday’s Prix de l’Arc de Triomphe.

That unbeaten colt is now a general 8-1 shot to give Ireland’s champion trainer a ninth Derby success to match the record haul of Lester Piggott.

In the short-term though it will be the opportunity to equal Vincent O’Brien’s three Arc victories that focuses the attention of the legendary figure’s Ballydoyle successor.

If the 2020 renewal of Europe’s greatest all-aged race is being billed as a clash of the former dual-Arc heroine Enable and her younger rival, O’Brien still appears disinclined to put all his eggs in the Love basket.

He indicated at the weekend that Serpentine, who was behind his stable companion Mogul in the Grand Prix de Paris on his first start since Epsom in July, could be supplemented into the Arc on Wednesday at a cost of €72,000.

“There is a good chance that Serpentine will be supplemented. He seems to have come out of his race well,” O’Brien said. “We also have Mogul, Japan, Love and Sovereign.”

The Irishman was triple-handed in the 2016 Arc when Found led home an unprecedented 1-2-3. That race was run at Chantilly while Longchamp was being redeveloped. Dylan Thomas was O’Brien’s previous winner in 2007.

They are among an elite group of just seven Irish trained horses to have won France’s greatest race which was first run 100 years ago.

Vincent O’Brien’s Alleged was the only one of them to win it twice (1977-78.) Ballymoss was also successful for the legendary trainer in 1958.

Found is the only filly to figure among the seven but Love, another daughter of Galileo, is a general 6-4 favourite to emulate her.

Love’s rider Ryan Moore is chasing a third Arc too while Enable’s partner Frankie Dettori has a record six wins in the race.

Riding arrangements for Ballydoyle’s runners at Longchamp will be finalised during the week but the Coolmore team in Australia have already revealed jockey plans for the small but select team O’Brien has sent down under for the Melbourne spring carnival.

The Irish Derby winner Santiago will be ridden by Cork born ex-National Hunt jockey Johnny Allen in the Melbourne Cup on November 3rd. Allen has carved out a spectacular new career as a Group 1 winning rider on the flat in Australia in recent years.

His stable companion, Tiger Moth, an impressive winner over ‘Irish Champions Weekend’ will have the assistance of the three-time Cup winner, Kerrin McEvoy in ‘the race that stops a nation.’

Before that Winx’s jockey Hugh Bowman will get the leg up on the 2019 Derby winner Anthony Van Dyck in the Caulfield Cup next month.