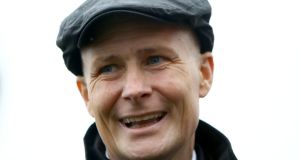 The death took place on Tuesday evening of the nine-times champion jockey Pat Smullen. He was 43 and had been diagnosed with pancreatic cancer in 2018.

Smullen, who memorably completed the Epsom-Irish Derby double, was at the centre of a champions race for cancer trials at last year’s ‘Irish Champions Weekend’ which raised over €2.5 million for cancer research.

It was part of a brave battle against the disease which first affected him before the start of the 2018 flat season in Ireland. After extensive treatment he received a clean bill of health but decided to retire from the saddle in May of last year. However in August a setback meant he had to undergo further chemotherapy.

The Co Offaly native had already secured himself a position as one of the best and most successful flat jockeys in modern Irish racing history.

A champion apprentice in 1995, shortly after he was picked by renowned trainer Dermot Weld to take over as stable jockey from Michael Kinane when he moved to ride for Aidan O’Brien and Coolmore Stud.

The new team enjoyed immediate success, including with the four-time Irish St Leger winner, Vinnie Roe, and became one of the most enduring partnerships in racing.

Married to Frances Crowley, herself a Classic-winning trainer, the couple have three children, Hannah, Paddy and Sarah.

Winner of nine Irish Classics in all, Smullen was also successful at the highest level in France, Britain and the US.

Pat Smullen was a wonderful jockey and a tremendous ambassador for racing in and out of the saddle.

Here's his proudest moment as a rider, when winning the 2016 Derby at Epsom aboard Harzand in the silks of the Aga Khan for trainer Dermot Weld. pic.twitter.com/LpdJpyTKgT

However perhaps the hugely popular jockey’s greatest moment in the saddle came when guiding Harzand to success in the 2016 Derby at Epsom.

The Weld-trained colt almost didn’t run and had to have a foot problem treated up to the eve of the race.

Despite the unusual build-up however Smullen’s trademark poise was stamped all over the race as he guided the Aga Khan’s star to a decisive defeat of US Army Ranger.

“To win the Derby is the defining moment for a rider. I appreciated every minute of it,” Smullen later said.

He also enjoyed Classic success in England on Refuse To Bend in the 2,000 Guineas of 2003.

Deep sadness greeted the news of his passing on Tuesday night throughout racing and sport in general.

Jonjo O’Neill, the former champion jockey and Cheltenham Gold Cup-winning trainer, who endured his own fight against cancer tweeted: “Truly heartbreaking news about Pat Smullen. He was a great jockey and even better man. My thoughts are with his family at this time.”

Brian Kavanagh, chief executive of Horse Racing Ireland, paid tribute to Smulle, saying: “Pat was one of our greatest stars. He was nine-times champion jockey, but in many ways his greatest achievements were out of the saddle.

“Since his diagnosis, he did wonderful work fund-raising for charity and he battled this disease with great heart and it’s hard to believe he has passed at such a young age. All our thoughts are with Frances and his three children, Hannah, Paddy and Sarah, and all his friends and colleagues in the weighing room.

“It’s a really sad day for Irish racing. Pat was one of the finest men you could hope to meet. There’s been such a reaction around Irish racing and such a degree of shock, which shows the high regard in which Pat was held.

“He was a pleasure to have anything to do with – his achievements in the saddle were one thing, but his qualities outside of it were something else.

“He was a global figure in racing, but his reaction to his diagnosis and the fund-raising he did last year in particular was really wonderful.