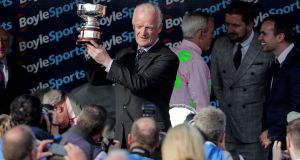 Ruby Walsh can’t realise his ambition to win French racing’s version of the Cheltenham Gold Cup but his old ally Willie Mullins will have five chances to fill another big race gap in his CV in Paris on Sunday.

After finishing runner up six times in the Cheltenham Gold Cup Mullins famously broke his duck in steeplechasing’s blue riband with Al Boum Photo in March.

The renowned jockey explained that day how not winning the Zeturf Grand Steeple-Chase de Paris was one regret from his lustrous riding career.

Mullins too has pointed to Auteuil’s historic and hugely lucrative €820,000 version of the Gold Cup as a major ambition and he’s set to have a fourth crack at winning the three mile and six furlong event on Sunday.

Paul Townend takes over on Burrows Saint although his closest rival in last season’s jockey’s championship, Rachael Blackmore, misses out on riding the Aintree Grand National third, Rathvinden. She is facing about two weeks on the sidelines after a fall at Clonmel on Thursday.

No overseas runner has won France’s biggest jumping prize since Mandarin in 1962. It’s a decade since Mullins’s first runner in the race, Pomme Tiepy, was eighth. In 2015 On His Own was seventh while Djakadam was eighth a year ago.

The home-trained Bipolaire shades Burrows Saint for favouritism in some betting lists although there appears to be confidence too in the chance of Docteur De Ballon. He is trained in France by Louisa Carberry, wife of the former Champion Hurdle winning jockey Philip Carberry.

Mullins also has five starters in Saturday’s French Champion Hurdle, the €350,000 Grand Course De Haies D’Auteuil, due off at 4.00.

The Irishman is seeking a fourth win in this race and Townend has opted for the star mare Benie Des Dieux who will tackle her longest ever trip in the three miles, one furlong contest.

Bapaume was runner up to De Bon Coeur in the race a year ago and that opponent is odds-on in most lists to repeat the win.

Melon (Power,) Yorkhill (Danny Mullins) and the Punchestown festival winner Mr Adjudicator (James Reveley) are other hopes for Mullins who has another Grade One chance on Sunday as French Made lines up in the $250,000 Prix Alain Du Breil, France’s Triumph Hurdle.

“With the winter we had in Ireland a lot of our horses haven’t had many runs which is why we’ve such a big team over here in France,” Mullins explained. “I’m sure the French aren’t happy but we’re here and we’ll see what happens.”

Co Tipperary trainer “Fozzy” Stack is also in pursuit of continental success on Sunday when he saddles Wargrave (Jamie Spencer) in the German 2,000 Guineas in Cologne.

Wargrave was fourth to Never No More in Leopardstown’s classic trial last month and is one of 11 lining up for the Group Two Mehl-Mulhens-Rennen at 3.40.

Stack has one runner, Nicaro, at Navan’s Saturday fixture where the Listed feature is the Years Stakes. Dermot Weld’s Masaff mixed with some good company as a juvenile and could relish the trip.