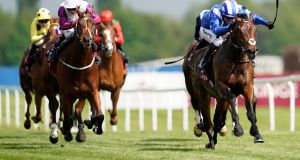 Mustashry put up a career-best performance as he skated away from his rivals to lift the Al Shaqab Lockinge Stakes at Newbury.

Taking trainer Michael Stoute’s record tally in this one-mile feature to eight, the Sheikh Hamdan Al Maktoum-owned six-year-old landed a first Group One after just one previous attempt, with retained jockey Jim Crowley in the saddle.

Ostilio was soon setting the pace, with star filly Laurens keeping him company and Mustashry well in touch.

There were plenty in with chances two furlongs out, before Mustashry and Laurens looked to fight out the finish.

Mustashry (9-1) got on top just inside the final furlong and pulled clear to win by two and a half lengths.

Accidental Agent stayed on well to claim third place, half a length away, with Ken Condon’s Irish challenger Romanised running well in fourth, just ahead of the Aidan O’Brien-trained Le Brivido.

Stoute said: “We knew this horse was in very good shape and I have to confess that it’s Jade [Ransley] who has made this horse – she rides him and has looked after him from the very start.

“He’s had his niggles, but I’ve never had him better than today.

“The Queen Anne is the race that comes to my mind, while remembering he is versatile and has won over a mile and a quarter. But I think the Queen Anne is what Sheikh Hamdan wants.”

Crowley said: “He beat a good filly into second, and he now feels like a proper horse, having won over seven, a mile and a mile and a quarter. He had a little blip at the Breeders’ Cup, but he’s won well today.”

Karl Burke is eyeing a rematch with the winner at Royal Ascot for Laurens.

The North Yorkshire trainer said: “I was delighted with her run, she lost her lead, but then in the last 50 yards got her second wind and stayed on again, so I’m sure there’s some improvement in her.

“She will go for the Queen Anne next and it will be fillies’ only [races] after that.”

Stoute’s quest to get what would be a much-deserved first Group One triumph with Crystal Ocean came a step closer when the five-year-old outclassed his foes in the Al Rayyan Stakes.

Ryan Moore did have to stoke the 2-9 favourite up at the quarter-mile pole, but the entire quickly shook off the attentions of Raymond Tusk before galloping the race out to take the spoils in convincing fashion by two lengths from Laraaib.

It was a performance that makes him a leading light for whichever race the trainer opts for at Royal Ascot.

Crystal Ocean has had to settle for second on each of the three times he has contested a Group One, and having skipped a clash with Magical at the Curragh, he will most likely head for the Prince of Wales’s Stakes on the Wednesday of the Royal meeting.

Stoute said: “Today was a messy race and he would be a lot fitter than he was last time.

“There’s a long way to go and I won’t commit yet, though at this stage I would prefer going for the Prince of Wales’s.”

PaddyPower and Betfair cut the winner to 7-1 from 8-1 for that race.

1 Gerry Thornley: Home and away Six Nations could be its ruination
2 Sideline Cut: Vignette shows why Bird is the true shark in The Last Dance
3 Munster braced for worst of financial crisis due to Thomond Park debt
4 Coming fourth in the Olympics didn’t change this fearless quartet, time did
5 Sports nerd heaven: Irish elite logging on for Analytica Zoom part two
Real news has value SUBSCRIBE