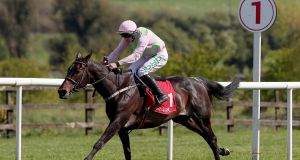 The Willie Mullins-trained mare took the step up to three miles, one and a half furlongs in her stride as she caused an upset in defeating the 4-6 favourite, to follow up her Punchestown triumph earlier this month.

Benie Des Dieux (3-1) was the shortest priced of Mullins’s five runners and travelled well throughout for Paul Townend, just off the pace as Galop Marin made the running with De Bon Coeur close up.

Hitting the front two out, Benie Des Dieux swept clear to win by six and a half lengths from De Bon Coeur, with Berjou third and Bapaume fourth in the Rich Ricci colours of the winner.

“I was surprised how easily she did it,” Mullins told Sky Sports Racing.

“De Bon Coeur appeared to be travelling so well the whole way. I could see Paul travelling well, too, but I thought De Bon Coeur might have more and they decided to come on the outside down the back and we stuck to the inside.

“I don’t know whether that was a winning or losing move, but our mare did it nicely and Bapaume ran on to be fourth.

“However, I was disappointed with my other runners. They all have excuses, but I’m very happy for Rich Ricci’s two horses.

“We only raced her in the mares’ races because they were there and winnable and we’re lucky enough to have horses to run in the other races. I wouldn’t have any problem running against the geldings with her.

“I did think she’d stay. I didn’t know if she was good enough.”

Townend had gone into the race not certain if Benie Des Dieux would stay.

He said: “The trip was an unknown, but we felt she would stay. I got a good run round. I was able to follow the favourite and it couldn’t have gone sweeter or smoother for me, and she picked up really well. When I went for her, she pulled out loads.

“We always thought she was very good and stepping up to that trip she was able to go within herself so well.

“It went very straightforward for me – as it normally does when you have a willing partner.”