Just when you think you’ve it figured, Kerry and Westmeath go and win camogie titles 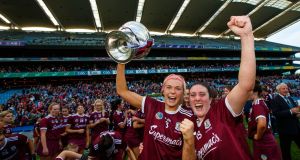 Galway’s Sarah Dervan and Ailish O’Reilly after their win over Kilkenny in the senior camogie All-Ireland final in Croke Park. Photograph: James Crombie/Inpho

It was early in the second half that the highly ominous message briefly scrolled across our screens, putting the severe winds up us and ruinating our enjoyment of the senior camogie final. “There is a CODE RED weather warning in place for tomorrow...” it read, before disappearing into the ether, most probably resulting in RTÉ viewers scurrying from their couches to batten down their respective hatches.

It was, mercifully, flashed in error, although if our hatches end up in Newfoundland we’ll know it was spookily prescient. What was real, though, was CODE MAROON, two first-half goals from Galway’s Ailish O’Reilly and another from Niamh Hannify threatening to blow Kilkenny away.

Before the senior encounter, which followed a zinger of an intermediate final, the RTÉ panel tried to persuade everyone to stay tuned lest they have been put off by last year’s stultifying final which was the very opposite of “a great advertisement for the game”. That was the day it felt quite like a free was awarded on every occasion a player looked at an opponent sideways, a mere eight of the game’s 27 scores coming from play.

Ursula Jacob, Anna Geary and Ann Marie Hayes, though, reckoned this one might be better, not least because Kilkenny had abandoned the notion that only locating a single player in the opposition half at times, their rearguard having a couple of blankets thrown over it, might negatively impact their scoring ability.

And having lost the last two finals Evanne Ní Chuilinn asked Kilkenny manager Ann Downey how much of a head-wrecking effect that would have on her charges.

“We’ve moved on,” she said, “you can’t look back on the past – you can’t unscramble eggs.”

Yet those three goals had them seemingly poached by half-time, the first coming after just a minute and 23 seconds, at which point Marty Morrissey was left speechless. Quite literally for those watching the game on RTÉ HD on the Sky platform. We didn’t hear a word from the fella again. The sound disappeared. You could hear him on the standard definition channel, but that was so grainy the chances of spotting the sliotar in full flight were nought. As First World problems go, this one secures the biscuit.

No matter, we had ourselves a proper final, one that was cheese to last year’s chalk. A mighty Kilkenny fightback, followed by Galway retaining their nerve to see it out, the majestic Galway midfielder – confusion alert – Niamh Kilkenny earning the award for “person you would most like to be by your side in the trenches”.

“The Queen of the Middle” as Joanne Cantwell put it as we were shown her “crowning moments” during the game, the showreel a stately one.

“Galway just wanted it more,” said Downey to Ní Chuilinn, not sugaring the bitterest of pills. But she saluted her players too.

Meanwhile, up in the Hogan Stand, the list of thank-yous Galway captain Sarah Dervan had to issue was an indication of how far things have come. There was a time it was just the manager and the sandwich-maker who needed to be acknowledged, now it’s strength and conditioning coaches, physios, nutritionists and the like. It’s at times like these that you feel the need to quote Loretta Lynn: “We’ve come a long way, baby”.

Kerry, with all but one of their players from the county’s single senior club, Westmeath coming from seven points down at half-time to Galway to prevail. Just when you think you’ve figured out sport, that there’s a certain predictability to it, it goes and messes with your head.

How happy was Westmeath manager Johnny Greville? Batten down your hatches.

“I CAN TELL YOU ONE THING, YOU’RE NOT GOING TO GET A JIM GAVIN FROM ME! I’M AS EXCITED AS ANY OF THE PLAYERS ON THE FIELD, ABSOLUTELY UNBELIEVABLE, THIS IS WHAT DREAMS ARE MADE OF, THIS IS WHY WE DO THIS!”

A Code Red-worthy hurricane of happiness.

1 Tipping Point: DeChambeau’s transformation raises questions, but who will ask them?
2 Hatton you heard, it’s Tyrrell’s time despite DeChambeau’s dominance in Detroit
3 Mental clarity in chaos: Novak Djokovic, the man who turned two into three
4 Ken Early: Resurgent United can be the top team – in Manchester
5 Patrick Mahomes reported to have signed 10-year $400m deal with Chiefs
Real news has value SUBSCRIBE