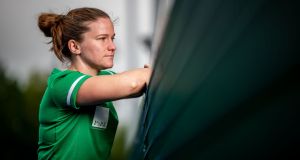 Irish hockey player Shirley McCay: ‘I would have gone for Canada or USA. The others would have been a huge test but we are under no illusions.’ Photograph: Morgan Treacy/Inpho

After missing out on Olympic qualification in recent years Irish hockey’s Shirley McCay remains cautious about Ireland’s prospects in their two-leg match against Canada in Dublin on November 2nd-3rd. But, she concedes, Canada is not a bad nation for Ireland to have drawn.

With the women’s and the men’s teams facing the Canadians in back-to-back matches for a place in the Tokyo Olympics next year, McCay is cautious about a team that has been improving in recent years.

“Mixed feelings, maybe it was nervous excitement but just glad to finally know,” said the Irish defender. “It has been a long time coming so it is good to have that focus for the next eight weeks.

“I would have gone for Canada or USA. The others would have been a huge test but we are under no illusions. They are on the rise and have defied the odds in recent years.”

The men will play both of their games in Vancouver, while the higher ranking of the women’s team earned them their home draw. The venue for the women’s games has been confirmed for Dublin and while the team have been holding recent international training sessions at UCD, no pitch has been announced.

The women’s team, who made it to an historical World Cup final in London last year, have never qualified a for an Olympic Games, while the men’s team qualified for Rio in 2016 for the first time in the sport’s history.

“Not sure yet [about the venue]. Abbotstown is just about to be laid,” added McCay. “UCD is a really nice turf but the pitch times are maybe not as flexible but, regardless where we play, having home advantage is going to be massive for us.

“It’s hard to put into words what it [Olympic qualification] would mean,” she added. “This is just the first part of the journey and then the hope is to be part of the team that actually goes which is a whole other effort. We are putting everything in so that, come next summer, we have the best 16 athletes in Tokyo.”

The new world rankings which came out on Monday place the Irish women’s team in eighth place with Canada ranked at 15.

The men have a more difficult challenge over two days on October 26th-27th.

To compound matters head coach Alexander Cox resigned from his position after just one year in the job following Ireland’s relegation to the second tier of the European Championships. A 4-0 defeat to Wales in their final match sealed Ireland’s fate and they have fallen from 11th to 13th in the FIH World Rankings. The Canadian men are ranked three places ahead of Ireland in 10th place.

“So Canada is a decent draw but certainly can’t be overconfident and looking too far past the end of October,” said Irish forward Eugene Magee. ” Big time ahead and hopefully we’ll be looking in the next week or so looking at appointing a new coach just to get everything in line and look ahead to the challenge. I am really looking forward to it now and it makes it all the more real.”