Canada stand between both Irish hockey teams and Olympic qualification 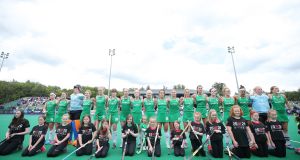 The Irish women’s hockey team will play Canada with Olympic qualification on the line. Photograph: Inpho

Canada stand between both the Irish men’s and women’s hockey teams and qualification for the 2020 Olympic Games following Monday’s draw at the International Hockey Federation’s headquarters in Lausanne. Both qualifiers are to be played over two legs on dates between October 25 and November the third.

The women’s world ranking of eight ensured that they will have home advantage for both legs, but the men, who have dropped to 13 in the list following their relegation from the top division of the European Championships during the summer, must travel to Canada for their ties.

The Canadians were the lowest ranked nation that both Irish teams could have been drawn against, so they’ll be content enough with the pairings. The women’s potential opponents were Korea (11 in the rankings), Belgium (12), the United States USA (13), with Canada ranked at 15, while the men could have faced Britain (7), Spain (8) or New Zealand (9) - the Canadian men are at 10 in the world list.

The last meeting between the women’s team and Canada ended in a 1-1 draw at a three nations tournament in Dusseldorf in June 2018, but the men, currently without a coach following the resignation of Alexander Cox, were 4-1 victors when they met the Canadians at a tournament in Malaga in January of last year.

The women are aiming for their first ever Olympic qualification while the men are looking to reach their second Games in a row having made it to Rio. The dates and venues for the qualifiers, which will be decided by the aggregate score over the two legs, will be announced later this afternoon.