Hard to see past Stradivarius for an Ascot Gold Cup double 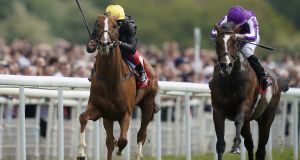 Stradivarius and Frankie Dettorri (L) pictured winning the Yorkshire Cup ahead of Southern France and Ryan Moore in May. Photograph: Alan Crowhurst/Getty

No one knows more about winning the Ascot Gold Cup than Aidan O’Brien. His son, Joseph, rode one of his record seven winners. Gold Cups are Willie Mullins’s stock in trade over jumps. However on Thursday all their attempts to dethrone the reigning champion Stradivarius could be in vain.

Admittedly, defending the Gold Cup crown has become more of a problem in recent years. No horse has managed it in the decade since O’Brien’s ultimate staying champion Yeats completed his unequalled four-in-a-row.

Considering less than stellar names such Sadeem (1988-89), Drum Taps (1992-93) and Royal Rebel (2001-02) used to be able to double up that perhaps reflects the Gold Cup’s rejuvenation in terms of quality and competition.

Sure enough even with Kew Gardens’s injury defection the Ballydoyle team can call on the 2017 Leger and Irish Derby hero Capri on Thursday, and even he is the apparent stable string behind last year’s Irish Leger winner Flag Of Honour.

Their outsider Cypress Creek also lines up alongside Mullins’s Thomas Hobson and O’Brien Jnr’s Master Of Reality in a five-strong Irish team that might contain just the ninth horse trained in this country ever to land the Gold Cup.

Their big problem though looks to be the diminutive Stradivarius, a pony-sized contradiction to what champion stayers are supposed to look like but whose CV indicates he can hold his head high against any of them from almost any time.

An unbeaten 2018 took in this race en-route to a lucrative million pounds bonus which looks on the cards again after a smooth Yorkshire Cup reappearance last month.

The son of Sea The Stars appears to have inherited his sire’s capacity to not win by very far but always to find a way to win, a priceless quality in any contest but possibly even more at the end of a draining two and a half miles.

The combination of him and Frankie Dettori produced a masterclass to narrowly win 12 months ago and the Italian is relishing the prospect of trying again.

“It is very hard to win back to back but he breaks all the rules. He is quite small for a stayer and he’s got a turn of foot which is a great weapon,” Dettori reported on Wednesday. “To add to that he has the will to win. It is very rare to see all of that in a horse.”

Willie Mullins came within a neck of winning with Simenon in 2013 and this time relies on Thomas Hobson, who chased Stradivarius home in last October’s Long Distance Cup over two miles. That was on soft going which suggests even ease in the ground looks something the favourite can cope with.

Aidan O’Brien runs both Mount Fuji and King Neptune as he chases a fourth win in the Norfolk Stakes although the Group Two might prove a breakthrough success for another Co. Tipperary based trainer in Paddy Twomey.

Sunday Sovereign’s three length maiden defeat of Arizona could hardly have been better advertised by Tuesday’s Coventry Stakes winner and his own subsequent start was a seven length saunter in the colours of new owner, the King Power operation.

Twomey, originally from Co. Cork, is fast developing a reputation as a shrewd operator in just the three years he has held a full training licence. Sunday Sovereign may emerge as a further glowing Royal Ascot profile boost.

Circus Maximus rewarded a supplementary entry in the St James’s Palace Stakes on Day One and Aidan O’Brien’s decision to add the Oaks third Fleeting to the Ribblesdale Stakes will be jumped on by many.

O’Brien is represented in all six races on Thursday. They include four hopefuls in the King George V Handicap with Ryan Moore on the topweight Constantinople. Wayne Lordon’s lightweight Eminence has a terrible wide draw. But as another son of Sea The Stars on Gold Cup day he should relish a step up in trip.

1 Andy Farrell hands Billy Burns first Ireland start against Georgia
2 ‘God is dead’: The world’s front pages remember Diego Maradona
3 Keith Duggan: Through the glories and the disgraces, we were all Maradona addicts
4 Rugby Stats: Blame game at lineout time is on the whole team
5 GAA Statistics: Can Cavan and Thomas Galligan beat Dublin with the long kickout?
Real news has value SUBSCRIBE