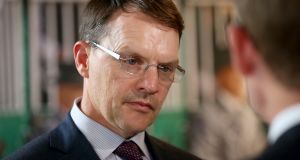 Aidan O’Brien: has amassed a total of 65 winners at Royal Ascot during his extraordinary training career. Photograph: Oisín Keniry/Inpho

A good start to Royal Ascot 2019 could tee Aidan O’Brien up for more history at British racing’s biggest meeting of the year.

In 2016 Ireland’s champion trainer saddled seven winners at a world famous fixture that is as much institution as sporting event.

It was a post-war record haul that equalled the late Sir Henry Cecil’s remarkable 1987 tally when Royal Ascot was still a four-day event containing just 24 races.

The first of five days at flat racing’s showpiece event begins on Tuesday with O’Brien long odds-on to be crowned leading trainer for a 10th time and a fifth year in a row.

But if that prize is already widely regarded as a foregone conclusion the prospect of the Irishman trumping Cecil and saddling eight winners – or more – this week looks a lot more intriguing.

Even talking in such terms further reflects the impact of a man who has shredded much of the sport’s statistical record book already, including adding 64 more Royal Ascot winners to an initial breakthrough success with Harbour Master in the 1997 Coventry Stakes.

O’Brien has four hopefuls lining up in the latest renewal of that prestigious two year old event including the likely favourite Arizona who beat his stable companion King Of Athens by eight lengths at the Curragh last month.

Ryan Moore takes the reins on Arizona and with the power of Ballydoyle behind him the Englishman is also odds-on to be top jockey this week for a ninth time. With 53 winners in all, Moore is rapidly closing in on his friend and rival Frankie Dettori (60) as the current top Royal Ascot rider.

However even for racing’s most powerful operation, and even with stars such as Magical in Wednesday’s Prince Of Wales’s Stakes and Hermosa in the Coronation Stakes on Friday to come, a good start can feel like half the battle.

Unlike the Coventry, and in the St James’s Palace Stakes where he has three hopes, O’Brien relies solely on Le Brivido in the opening Group One Queen Anne Stakes.

On an afternoon when the chance of thunderstorms promises uncertainty about ground conditions, never mind sartorial considerations, the shortest priced of three Irish-trained hopes represents a suitably unsure prospect.

Ultimately the way Le Brivido ran on in the closing stages of last month’s Lockinge Stakes looks to give him a first-rate chance of reversing form with the winner Mushtashry.

Le Brivido didn’t get the run of that race and was ultimately finishing better than most. However he looked to get very warm before that race and the bare form is he has to pass out the four who finished ahead of him in that Lockinge.

They include last year’s Irish 2,000 Guineas winner Romanised who could ultimately represent better each way value to give his trainer Ken Condon a first ever Royal Ascot success.

So in many ways Le Brivido’s position at the top of the ante-post market is as much about his trainer as his own chance. But given O’Brien’s track record it’s hardly surprising bookmakers are treading warily.

The Irishman is chasing an eighth win in the St James’s Palace although with the Guineas hero Magna Grecia sidelined it is the supplemented Circus Maximus who represents probably a more hopeful than confident shot.

Instead it is the all-the-way Irish Guineas hero Phoenix Of Spain that sets the standard. Jamie Spencer’s mount won with authority at the Curragh and on the fact of it the runner-up Too Darn Hot faces a major task in trying to reverse that form.

Ballydoyle might be the bulwark of this week’s Irish raiding party but recent success levels suggest it may be far from a one-man show. That 2016 meeting saw a record 10 Irish-trained winners and the two and a half mile Ascot Stakes in particular has proved a happy hunting ground for the raiders.

Six of the last seven winners have been Irish-based including four for Willie Mullins who this time provides an intriguing contender in the Moore-ridden Buildmeupbuttercup.

Nothing she has done over jumps suggests she should top the betting but in a race full of jump performers, the layers are clearly adopting a similarly wary approach to Mullins as they do to O’Brien.

The highest rated jump performer of all is Noel Meade’s Snow Falcon, last year’s Kerry National winner and a former Irish Cesarewitch victor who will relish any more rain that falls.

Last year’s Irish Derby winner Latrobe is a fascinating contender for the Listed Wolferton Stakes. Victory would be a first Royal Ascot winner as a trainer for Joseph O’Brien and a first of any kind for his brother, Donnacha.

India coach Ravi Shastri hails ‘one of the greatest series ever’ 14:45
Ireland midfielder Conor Hourihane set for Swansea loan spell 14:25
Richard Keogh has joined Huddersfield until the end of the season 13:25
Jordan Henderson takes up ambassadorial role in support of NHS 13:05
Mason Jones not interested in being the Welsh Conor McGregor 12:01