Meath-based trainer Davison could strike at Royal Ascot with Fresnel

Triple Group One winner Wild Illusion to skip Ascot, and will instead wait for the Curragh’s Juddmonte 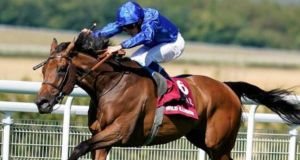 Jack Davison aims to boost his burgeoning training career at Royal Ascot on Thursday when Fresnel lines up in the Ribblesdale Stakes.

The young Dunboyne, Co Meath-based trainer has held a full licence for less than two years, but could strike at British racing’s most high-profile week of the racing year.

Fresnel is set to take her chance in the Group Two fillies event after a fine fourth in her last start in York’s Musidora Stakes.

Davison has had a handful of winners so far, but goes to Ascot in form having scored at Fairyhouse on Friday with Black Magic Woman.

“Fresnel’s progressed with each and every run. I know we’re competing with the big boys, but I’m really looking forward to Ascot.

“She ran well in the Musidora, and has stepped forward since then. She’s an absolute professional, and you won’t stress her out too easily. She travelled over to York and took the whole occasion very well.”

Prior to York the daughter of Sea The Stars was also fourth in Navan’s Salsabil Stakes behind the subsequent Oaks runner-up Pink Dogwood.

The Musidora form wasn’t boosted at Chantilly on Sunday when both the York winner Nausha and the runner-up Entitle failed to land a blow in the French Oaks won by Channel.

The Pierre Charles Boudot-ridden filly landed the €1 million Prix de Diane in a tight finish from Commes, with the outsider Ground Glory in third.

One star filly that will skip Ascot is the triple Group One winner Wild Illusion who instead will wait for the Curragh’s Juddmonte Pretty Polly Stakes on Friday week.

Wild Illusion appeared to fail to fully fire on her seasonal reappearance in the Prix d’Ispahan at Longchamp, but trainer Charlie Appleby is anticipating an improved performance at the Curragh.

“I was pleased enough with her first run, and she will definitely come forward for it. It was a respectable effort against the colts because it was the first time she’d run against them.

“The most important thing is she will come forward for that run, and will improve for the step up to 10 furlongs and racing against her own sex. If she goes to the Pretty Polly in top form then she will be a major player.”