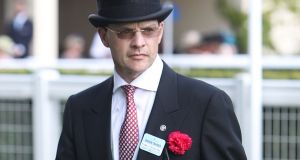 Aidan O’Brien: top trainer will once again have a formidable team of horses bidding for top prizes at Royal Ascot. Photograph: Steve Parsons/PA

Aidan O’Brien is hot favourite to be crowned top trainer for a tenth time at Royal Ascot this week although his two sons, Joseph and Donnacha, will hope to break new ground.

They may not have to wait long either as the opening day of Royal Ascot on Tuesday could see a perfect family result for the two brothers when they team up for Latrobe in the concluding Wolferton Stakes.

Victory for last year’s Irish Derby hero would be a first training success for Joseph O’Brien at British racing’s showpiece fixture. He did have half a dozen winners there during a short but hugely successful riding career.

In contrast his younger brother Donnacha has yet to have any sort of Royal Ascot success and Ireland’s reigning champion jockey is keen to put that right.

“It would be massive. Royal Ascot is probably my favourite meeting on the whole calendar,” he reported. “The whole occasion, I love it; fast ground, fast horses. It would be fantastic to get a winner there.”

The youngest O’Brien may even have fulfilled that ambition before he gets on Latrobe as his father is set to saddle an 11-strong team on Day One alone.

Le Brivido, with Ryan Moore on board, flies the Ballydoyle flag on his own in the opening Queen Anne Stakes. But there are four O’Brien declarations for the following Coventry Stakes and three in the St James’s Palace Stakes.

The three year olds Sergei Prokofiev and Fairyland are the champion trainer’s two hopes in Tuesday’s other Group One, the King’s Stand Stakes.

It is a formidable show of strength ahead of a week that sees European racing’s most successful operation unleash potential Group One hotpots such as Magical (Prince Of Wales’s Stakes,) Hermosa in Friday’s Coronation Stakes and Ten Sovereigns in the following day’s Commonwealth Cup.

Harbour Master in the 1997 Coventry Stakes was the first of 65 Royal Ascot winners in all for O’Brien, putting him third only to Sir Michael Stoute and the late Henry Cecil in Royal Ascot’s all-time list. In 2016 alone the Irishman saddled seven winners, a record he shares with Cecil.

O’Brien is 4-9 to be crowned top trainer again this week which would be a fifth year in a row he’s managed the feat.

Not surprisingly, with the pick of Ballydoyle behind him, Ryan Moore is odds-on to be top rider but Donnacha O’Brien also features on betting for that award at 20-1.

The 20-year-old rider has enjoyed major success for both his father and brother in the last few years including last month’s 2,000 Guineas on Magna Grecia.

That followed on from three classic wins in 2018, including Latrobe in the Irish Derby which was his brother’s first Irish classic as a trainer.

Crowned champion jockey in Ireland last year with 111 winners, he was also champion apprentice in 2016 when riding the first of his nine Group One winners, Intricately in the Moyglare Stud Stakes.

Frankie Dettori will begin another Royal Ascot on Dermot Weld’s Hazapour in the Queen Anne, a race which has also attracted Ken Condon’s Irish Guineas hero from last year, Romanised.

There are half a dozen Irish-trained hopes for the two and a half miles Ascot Stakes on Tuesday including Gordon Elliott’s Batts Rock who’ll have Dettori on board as well.

Before the Ascot extravaganza begins, both Elliott and Joseph O’Brien will take in Kilbeggan’s rather more rustic National Hunt charms on Monday evening.

O’Brien saddles half the six-strong field for a novice chase, including the former Triumph Hurdle and Galway Hurdle winners, Ivanovich Gorbatov and Tigris River.

However it could shape up into a struggle between Elliott’s Ravenhill and Willie Mullins’s Brahma Bull.

Both won last time out and although he doesn’t appear to be a straightforward ride Brahma Bull does look open to progression based on a win at Tipperary.