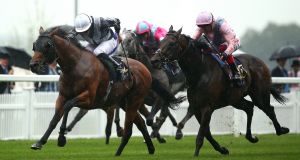 Ryan Moore began Royal Ascot with a vivid reminder of why he’s Aidan O’Brien’s number one jockey as Ireland’s champion trainer took an immediate grip on the best week’s racing of the year.

O’Brien’s left-field call to supplement the Epsom Derby sixth Circus Maximus into the one mile St James’s Palace Stakes proved inspired with the 10-1 shot just holding on in a thrilling finish.

It was an eighth win in the Day One feature for O’Brien who’d earlier landed a ninth Coventry Stakes with the 15-8 favourite Arizona proving half a length too good.

Both were ridden by Moore and if the usually taciturn Englishman appeared rather more animated than usual in the aftermath it reflected perhaps the vagaries of fortune he’s had to deal with this season.

The strength in depth of O’Brien’s Ballydoyle team has seen Moore endure the frustration of being on the ‘wrong one’ in both Newmarket Guineas and the Epsom Derby.

A near-miss on Pink Dogwood in the Epsom Oaks looked to have the hallmarks of a jockey forcing things rather than trusting to the instincts that have seen him acclaimed in some quarters as one of the world’s top riders.

However Moore has established a Royal Ascot hegemony in recent years and that sure touch at a meeting in which he has been leading rider for the last five years returned with a vengeance on Circus Maximus.

Carrying blinkers as well as the hint contained in his supplementary entry, the Galileo colt’s proven stamina in the rain-softened conditions came to the fore in the closing stages.

Circus Maximus first beat off the Irish Guineas winner Phoenix Of Spain, then the 2-1 favourite Too Darn Hot, and despite Moore dropping his whip in the final strides, the Irish colt held of King Of Comedy’s late lunge by a neck.

“Aidan phoned me up on Monday morning and said about putting him in. I said if they supplement them they have to win!” Moore said. “He (O’Brien) knew this horse had a bit of talent and thought he ran a good race in the Derby but just didn’t stay.”

O’Brien and Moore are already heavy odds-on favourites to be leading trainer and jockey again this week but the commercial significance of establishing a new Group One winning miler might make the result of Tuesday’s feature race the most important.

“In all fairness to the horse we pitched him in and asked him a difficult question. We always thought a mile and a mile and a quarter was his trip even though we ran him in the Derby,” O’Brien said.

“I’m delighted for the lads (Coolmore owners) as to have a winner here is difficult and important. I think you have a choice of the Sussex or Eclipse and both would be strong possibles,” he added.

Moore was at his strongest on Arizona who looked in trouble for much of the Coventry only to wind up a decisive enough winner for 6-1 quotes about next year’s 2,000 Guineas to appear.

Racing opened with drama as the defending Queen Anne Stakes champion Accidental Agent stood still and refused to race when the stalls opened.

Instead it was last year’s runner up Lord Glitters, trained by Fermoy born David O’Meara, who pounced late to win at 14-1 from the 20-1 runner up Beat The Bank.

The latter’s rider Silvestre De Sousa afterwards picked up a seven day ban for his use of the whip.

Moore was runner up in that on the 9-2 favourite Magic Wand and also had to settle for second in the marathon Ascot Stakes on Willie Mullins’s Buildmeupbuttercup.

The 7-1 shot looked to have timed his run perfectly from the back of the field but topweight The Grand Visir proved too resolute.

1 Dan Leavy gets back in the thick of things as Leinster trounce Zebre
2 Six Nations - Ireland v Italy: Kick-off time, TV details, team news, standings and more
3 Fresh faces and renewed appetite: Is this a new era for Irish rugby?
4 Old failings come back to haunt Ireland in Kiev as Ukraine take the points
5 Mike Catt wary of young Italians and excited by Irish debutants
Real news has value SUBSCRIBE