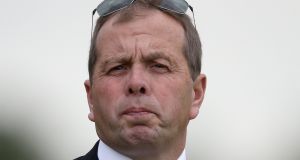 Ger Lyons: “I’d rather win a Phoenix than be second in a Coventry on bad ground”

The Royal Ascot countdown is firmly under way, although testing ground conditions could make Ger Lyons’s mind up about whether or not to run his star two-year-old Siskin on Tuesday.

Unbeaten in two starts, including an impressive Marble Hill victory at the Curragh, the exciting Juddmonte-owned colt is among the favourites for the Coventry Stakes.

Lyons’s sole Royal Ascot winner was a dozen years ago with Elletelle in the Queen Mary, but trying to bridge that gap isn’t a factor in the Co Meath-based trainer’s thinking on running plans.

“I’m not as gung-ho about Ascot as everyone else seems to be. I go where I think I can win. I don’t like going for the beer or on a whim. So if it looks like being soft I’m not going over there for soft ground,” he said on Friday .

‘‘They [Juddmonte] have left it up to me, and I’m assuming, with all the rain they’re having in England, that Ascot will start off soft and then dry up.

‘‘Now if it was what I’d call normal, Ascot good to firm I’d have a look. But if it isn’t the plan would be my original thoughts on the subject, going to the Railway Stakes and the Phoenix Stakes.

‘‘Our friend down below [Aidan O’Brien] hasn’t really launched his two-year-olds yet, so it’s only a matter of time before he starts sending out humdingers. But at the moment we have a nice two-year-old, and if he’s right I’d like to try and win a Phoenix. I’d rather win a Phoenix than be second in a Coventry on bad ground.

‘‘He’s a very straightforward horse and the people closest to his sire (First Defence) tell me they all want fast ground. There’s no pressure from Juddmonte, and I’m left to do what I think is right,” says Lyons.

Going conditions are also likely to be a major factor in other potential running plans for Lyons’s entries at British racing’s flagship meeting of the year.

Among them are Basic Law in the Britannia, while another handicap possible later in the week is the four-year-old Johnny Drama.

After two wins this year, including a seven lengths success at Roscommon last time out, Johnny Drama has been purchased by the King Power operation started by the late Thai owner Vichai Srivaddhanaprabha, former chairman of Leicester City football club.

Lyons is enjoying another productive season at home, and up to Friday evening’s action was second only to Aidan O’Brien in the trainer’s championship.

He has four runners at each of this weekend’s two flat fixtures, while a busy programme also includes back-to-back National Hunt fixtures at Downpatrick.

The 10-time winner lines up in the concluding conditions race where he could face a difficult task against the three-year-old Wargrave, who ran last in the German Guineas and should like cut in the ground.

The newcomers Delta Dawn and Kells are both sons of Galileo, but Donnacha O’Brien is on Mythologic, who has the experience of his Curragh debut behind him.

On that occasion he brought up a 1-2-3 for Ballydoyle behind his stable companion Lope Y Fernandez. The Australia colt can give that form a boost here.

Joseph O’Brien has three in Limerick’s opening juvenile maiden on Saturday, with his younger brother teaming up with the Listowel-placed Eriking.

Later on the Limerick card it will be interesting to examine any market moves for King Pellinor in the mile and a half maiden. This was the Ballydoyle runner who started odds on in the Tipperary maiden won in April by Sir Dragonet. King Pellinor faded right out that evening,. but could be worth another chance in a race where Trossachs sets a 78-rated standard.