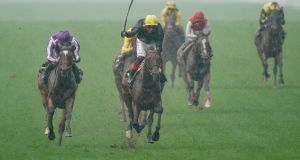 Frankie Dettori proved again by helping Crystal Ocean secure a vital Group One success on Wednesday that if there’s a Royal Ascot job to be done he’s the man to do it.

Runner-up at the top level on three previous occasions, and with Ryan Moore committed to Aidan O’Brien’s 13-8 favourite Magical, Crystal Ocean got teamed for the first time with Dettori in the Prince Of Wales’s Stakes.

Having earlier landed the Queen Mary Stakes on Raffle Prize, Royal Ascot’s most successful rider oozed confidence on a five-year-old stalwart whose proven stamina on a day beset with heavy rain saw him backed into 3-1.

Dettori sat off Magical’s pace - forcing stablemate Hunting Horn before kicking on the turn in. Moore gave dogged chase on Magical although on the soft ground he must always have had a sinking feeling that he was fighting a losing battle.

Dettori’s 75-1 double brought his overall Royal Ascot tally to 62 while it was a landmark 80th win for the meeting’s most successful ever trainer, Michael Stoute. In commercial terms though it was the single Group One credential now next to Crystal Ocean’s name that counts most.

Having broken his duck over a mile and a quarter, and on the most prestigious stage of all to boot, the son of Sea The Stars is now a valuable stallion prospect even at the age of five.

“He’s just a high class horse and I’m delighted to have won a Group One with him now. He’s just a very admirable racehorse,” said Stoute, who hadn’t wasted any time last week accepting Dettori’s invitation to keep him in mind for the ride.

Dettori recalled: “As soon as I knew Enable was going for the Eclipse, I rang Sir Michael’s office and said I was available. He was quick to react and called me in the afternoon to say I’d got the ride.

“Everything went to plan. I sat where I wanted to sit and kicked early to use his stamina. He was full of running and I felt it was going to take a good one to get past me.”

If the feeling persists that on quicker going then Magical might have been such a good one then Crystal Ocean was due a touch of fortune going his way.

He is already just 3-1 to go one better than his second to stable companion Poet’s Word in the King George back at Ascot next month, a midsummer highlight that may see Magical take another crack at him.

With Enable possibly in the mix as well Crystal Ocean could be without Dettori’s services, a factor still capable of tipping any big race anywhere according to Mark Johnston.

After Raffle Prize squeezed past the giant American filly Kimari by a head, British racing’s winning-most ever trainer dared to slot Dettori ahead of Lester Piggott in the all-time list of supreme riders.

“No disrespect to Lester but is Frankie not just the greatest jockey?” queried Johnston.

“I could see him tracking Wesley Ward’s horses and Frankie looking reasonably relaxed. You couldn’t be in a better position in a race and I knew we were tracking the right one.

“Frankie was a true professional as a young jockey back in 1993 and I know he is a superstar. On the big day he’s special,” he added.

Having also had to settle for second in the Queens Vase with the 20-1 shot Barbados - behind Oisin Murphy and Dashing Willoughby - the Ballydoyle team made it three winners for the week when the 7-1 shot Southern Hills made the most of a high draw in the concluding Windsor Castle Stakes to break his maiden in style.

Southern Hills’s win was a third of the meeting for Ryan Moore who joined Danny Tudhope at the top of the leading jockeys award.

Both riders rode doubles on Day One and Tudhope had earlier added to that with a win on the 9-1 shot Move Swiftly in the Group Two Duke Of Cambridge Stakes.

It was a tenth Royal Ascot success for trainer Willie Haggas and a timely morale boost considering his regret at having run Sea Of Class behind Crystal Ocean.

“As for the trainer making the decision to run his star filly on this horrible ground it’s something I have to take responsibility for,” Haggas said.

“I was very disappointed with myself but I was extremely grateful to the jockey (James Doyle) for giving her as kind a race as possible and I’m sure she’ll bounce back,” he added.