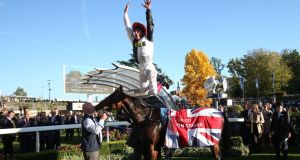 Breaking the dominance of Aidan O’Brien is a hard thing to achieve – but John Gosden proved up to the task as a scintillating treble on Qipco British Champions Day helped secure his third Flat trainers’ championship.

With the coveted crown having headed to Ballydoyle for the past two seasons – and six times in total – the Newmarket handler foiled the hat-trick after taking Britain’s most valuable race day by storm at Ascot to wrap up the title with more than two months remaining.

Gosden said: “I gave the cup to Aidan and he had to give it to me this year. It means a lot. I said to Aidan on January 1 ‘we start with a blank sheet again, a bit like a football manager’.”

Though wins for Roaring Lion in the Queen Elizabeth II Stakes and Stradivarius in the Long Distance Cup all but secured a first title for Gosden since 2015, the best was arguably saved until last, with Cracksman recording a brilliant second success in the Qipco Champion Stakes.

Arriving on the back of an odds-on defeat in the Prince of Wales’s Stakes at the Royal meeting, the son of Frankel returned to his imperious best to take the Group One prize by six lengths, completing a double for Frankie Dettori, who was also victorious aboard Stradivarius.

Reflecting on the day, Gosden said: “Frankie, how he got through the Houdini hole on Stradivarius, I don’t know.

“I thought Roaring Lion was beyond brave, as he was never enjoying the ground, but he had the guts to win it, and I thought Oisín [Murphy] was cool and didn’t panic.

“Cracksman had been showing it at home and the vibes were pretty strong from the work reports in Newmarket. I knew that just focus his mind and he will fly, and he literally flew. It’s not a bad day to have a treble.”

While most of those housed at Clarehaven Stables have played their part in some way in helping Gosden take title number three, there are several performances that particularly satisfied the trainer.

Gosden added: “I think getting Enable back was good, and getting Cracksman back is top class. That was very fulfilling, at the top level.

“To see Stradivarius going round after round is very fulfilling. It’s all down to the horse, as they have got to be strong in the mind and body and we are lucky to have them.”

It may be Gosden’s name that appears in the headlines, but winning the championship again has been far from an individual effort in his eyes – and one that has happened through the hard work of those behind the scenes.

He said: “You are lucky that you have great owners that send you some lovely horses. I’ve got a wonderful staff who have worked with me for many years.

“It’s a good team, as it’s all on first-name terms and everyone talks to each other and everyone’s ideas are discussed. It has got to be down to those three ingredients.

“There is no individual satisfaction on this horse or that. It is about trying to do the best and if it is to win a little race with a filly and make her a winner, that is very fulfilling.

“I’m just lucky to have some great staff and fabulous owners and the horses to go with it. Without them, I would have nothing.”

O’Brien did not go away empty handed from Ascot as Magical proved the pick of his six runners to win the Qipco British Champions Fillies & Mares Stakes, as hot favourite Lah Ti Dar fell short in the Group One showpiece.

Tenth when last seen in the Prix de l’Arc de Triomphe earlier this month, Magical (5-1) was happier back against her own sex and comfortably landed the spoils.

She was brought with a strong run early in the straight by Ryan Moore to head the Gosden-trained favourite Lah Ti Dar over a furlong out.

The daughter of Galileo maintained the tempo to hold another Gosden runner, Coronet, by a length.

O’Brien said: “She ran a lovely race in the Arc, and we really fancied her for the Oaks last year – [but] she had a little setback and didn’t get to run.

“She was working lovely – and we’re really, really delighted.

“We were always going to take our time with her [in the race], and she had a lovely position and relaxed. So I couldn’t have been happier.

Asked about a trip to the Breeders’ Cup, the Ballydoyle trainer said: “It’s possible. Obviously, the lads will decide what they want to do – like they always do.

“We see how they come out of races, then we suggest a plan we think might suit – then the lads will make the decision themselves.

“She is very valuable and as she had an injury we want to make sure she is okay if she was to go to America.”

Gosden said: “Coronet ran a blinder. She was forced wide from the draw, but she got a clear run. Full marks to the winner, though.

“Lah Ti Dar ran a super race, but as you see by the size of her she is still rather unfurnished and is a work in progress. She is next year’s filly.

“She ran great and just showed a bit of weakness in this ground over the last furlong. They both run fabulous races.

“Coronet will go to the Lydia Tesio in Rome if she is in good order, that’s the plan. The other filly, we will just wait until next year until she is bigger and stronger.”