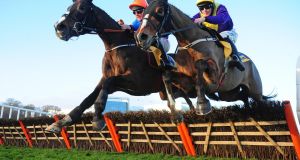 It was the unconsidered 14-1 outsider Mick Jazz who successfully picked up the pieces from one of the biggest shocks racing has seen for a long time after Faugheen was dramatically pulled up at Leopardstown on Friday.

The Willie Mullins trained superstar – beaten just once in his 14 previous starts – was a red-hot 2-11 favourite to beat four opponents.

However he started to struggle from before the second last flight and was pulled up by jockey Paul Townend. Faugheen was brought back to the racecourse stables by horse ambulance and was found to be sound and ‘post-race normal’ after veterinary examination. Samples were taken for analysis.

As one of the highest-rated hurdlers of modern times was being pulled up, Mick Jazz and Davy Russell got the better of Faugheen’s stable companion Cilaos Emery to win the €100,000 Ryanair Hurdle for Mullins’s great rival Gordon Elliott.

It completed a Grade One double for Elliott who’d earlier landed the Neville Hotel Novices Hurdle with the 10-1 shot, Shattered Love.

However it is expectations that Faugheen might return to reclaim the Champion Hurdle crown he won in 2015 at Cheltenham in March which threatened to be shattered after his second race back from injury ended so ignominiously.

The Irish star was removed from some Champion Hurdle betting lists and the reigning title-holder Buveur D’Air cut to as low as 1-2 favourite.

Mullins conceded it was a “huge setback” but stressed that Faugheen was sound and not distressed after the race.

“We will take him home and do all the tests we can do but the important thing is he is sound. It doesn’t look like there is any leg trouble. He pulled up sound, the vets passed him fine and he’s not distressed ,” he said.

“Paul said he felt very lacklustre, even in the first few furlongs. I’m sure something will arise. He might be incubating a cold. But his work was fine before and we had no worries about him coming here.

“The one thing was I thought in the parade ring he looked a little cool or cold in his coat compared to Cilaos Emery who looked fantastic. But Faugheen can look that way,” Mullins added.

Faugheen made a spectacular return to action from almost 22 months on the injury sidelines when landing last month’s Morgiana Hurdle at Punchestown.

It was his first race since the 2016 Irish Champion Hurdle at Leopardstown in which he put up his highest rated ever performance. Shortly afterwards however Faugheen was on the sidelines with a suspensory ligament injury.

His shock eclipse was another reverse this week for Mullins. He saddled two winners each at Leopardstown and Limerick on Friday but his nine Christmas winners overall pale compared to last year’s haul of 22.

With the Stayers champion Nichols Canyon losing his life on Thursday, and Min losing a Grade One in the stewards’ room the day before, Mullins admitted: “We’ve had better Christmases.”

Elliott’s top-flight double provoked some bookmakers to make him an odds on favourite to dethrone Mullins as champion trainer after coming so close last season. However Elliott was just content to enjoy his surprise victory with Mick Jazz.

“Obviously Faugheen looked to be a certainty. But there’s no such thing as a certainty in horse racing,” he said.

“It was Mick Jazz’s day. Today was his day in the sun. He’ll have an entry in the Champion Hurdle because you never know. He’s not a bad horse. But we’ll enjoy today first,” Elliott added.

“Paul pulled him up because he wasn’t going anywhere. When Cilaos Emery went by him, normally he would have picked up the bit and cracked on but he just didn’t. I knew we were toast then.

“Some of Willie’s horses have been in and out all week. Hopefully it’s something that shows itself and we have a horse we can get ready for Cheltenham and fight another day with.

“Hopefully he isn’t injured. The racing stuff is what it is. It’s the injuries that kill you. It’s been an extraordinarily challenging week but that’s topped it. It feels like a long, long winter at the moment,” said the American.

Earlier in the day Ricci’s colours were carried to victory for a second year in a row in the Grade Three Mares Hurdle by the evens favourite Let’s Dance.