Lyons tempted by National Stakes for Siskin’s next start 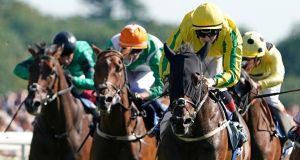 Having landed Europe’s richest handicap with Mustajeer on Saturday, Ger Lyons is considering his options in terms of testing Siskin’s classic potential next month.

The Co Meath trainer’s exciting and unbeaten Phoenix Stakes winner has a choice of Group One engagements in September.

Siskin could stay at six furlongs for Newmarket’s Middle Park Stakes on the 28th or step up to seven for the Vincent O’Brien National Stakes at the Curragh over ‘Irish Champions Weekend’ 13 days earlier.

That could mean a mouth-watering clash with Godolphin’s ante-post favourite for next year’s 2,000 Guineas, Pinatubo.

The Juddmonte-owned Siskin is as low as 8-1 second favourite in Guineas betting lists although Lyons believes the real test of future classic credentials is only starting now.

“We’ve held our own over here but things change from here on in. As they say, it’s squeaky bum time. All the future stars will be putting their heads above the parapet from here on in,” he said on Sunday.

However after four victories to date it is Siskin who’s among those setting the standard and although staying at six for the Middle Park might end up being favoured, Lyons admits to being tempted by the Curragh.

“If it’s a 50-50 call that both races look the same, and conditions were perfect, I’d love a go at the Vincent O’Brien because then you know if you’ve a Guineas horse or not.

“The ideal scenario is that I put him in the race he has the best chance of winning. I have no fears about seven furlongs. There is a question-mark about the mile but we don’t have to go a mile yet.

“If it’s good and quick on Vincent O’Brien day there’s a decision to be made because that’s where I’d favour to go, purely on a selfish basis because it’s Ireland and the Curragh and I want to win races here.

“But the final decision I’ll leave to the team [Juddmonte]. It’s down to how fields look like cutting up as well,” Lyons added.

By then his weekend hero Mustajeer will be in quarantine to continue his career in Australia. The winner of the first million pounds Ebor was back in Lyons’s Glenburnie yard on Sunday having lost 13 kilos on the back of his lucrative exploits.

It was a second cross-channel success of 2019 for the Lyons team although Kinch’s win in an Ayr handicap last month was worth less than six grand!

Domestically however Lyons is on course for his best ever season having reached 50 winners and sitting in third place in the trainers’ championship behind Aidan and Joseph O’Brien on just over €1.4 million in prizemoney.

Lyons finished third in the championship in 2017 with 72 winners. He expects it will be the fortunes of his two year olds that decide if that tally can be eclipsed this time.

“I’ve a lovely bunch of two year old fillies and the colts are slowly coming to the boil too. They’ll have to stand up and be counted because that’s where the winners will come from for the rest of the season,” he said.

“The older horses have done their job. The two good ones, Mustajeer and Who’s Steph, have done theirs and the bonus is that we’ve a Group One horse in there. We’re clinging on for third [in the table]. Aidan is away but Joseph and Jessie [Harrington] are very strong at the moment. I couldn’t be happier though,” he added.

Willie Mullins’s runner travelled well in a bumper at the track earlier this month only to weaken in the closing stages.

She could strip sharper now and the 107 standard set by Cats For Cash doesn’t look insurmountable now Wendy Howell goes over flights.