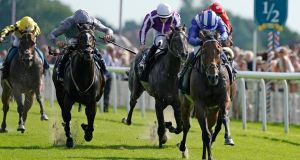 The Curragh’s leg of ‘Irish Champions Weekend’ is set to host probably the world’s fastest sprinter after Battaash put up a stunning record-breaking performance in York’s Coolmore Nunthorpe Stakes at York on Friday.

The mercurial five-year-old banished the memory of two previous defeats in the Group One contest to shatter Dayjur’s five-furlong course record set in 1990.

Trainer Charlie Hills immediately nominated the €400,000 contest for Battaash’s next start and the gelding goes to Ireland on the back of a landmark performance.

York’s perfectly flat five furlongs has always been a test of blinding speed although many regarded Dayjur’s time of 56.16 as a record unlikely to ever be beaten.

Not only did Battaash beat it, he smashed through the 56-second barrier to hit the line in 55.90.

Jockey Jim Crowley was smiling his appreciation and starting to ease up even before the winning post, yet the 7-4 shot had almost four lengths in hand of the runner-up Soldier’s Call.

Aidan O’Brien’s apparent third-string So Perfect was third but the Irishman’s 13-8 favourite Ten Sovereigns could manage only sixth.

The July Cup winner looked to be taken off his feet on his first start at the minimum trip, while another of his stable companions, Fairyland, beat only one home.

Ultimately though it was all about one horse and a singular display of raw sprint speed.

Fears of a negative horses for courses trend at York proved spectacularly unfounded as Battaash this time didn’t boil over beforehand and compromise his chances.

Taking a perfect tow from Ornate for the first half of the race, he powered though to put up a seminal sprinting performance.

“All the chat saying he doesn’t like York and he’s broken the track record – and that’s Dayjur’s track record as well!” Hills said.

“He was so cool and calm. It was a good decision to keep him at home last night. He loves his stable at home and it’s nice to keep a routine with him.

“He’s obviously been gelded so we can come back here again next year. I’d love to go to Ireland with him in a few weeks and then hopefully go to France and why not the Breeders’ Cup,” he added.

Dayjur famously threw away Breeders’ Cup sprint glory on the final start of his career when jumping a shadow metres from the line when in front.

Earlier on Friday, and at the other end of the distance spectrum, Stradivarius once again confirmed himself racing’s outstanding stayer with a routine Lonsdale Cup victory, which for a second year running resulted in a cool £1 million bonus.

John Gosden’s star is unbeaten in his last nine starts and the 4-9 favourite’s renowned turn of foot carried the day once again from Dee Ex Bee and Ballydoyle’s runner Il Paradiso.