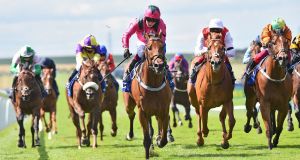 Cieren Fallon claimed a landmark first Group One success aboard Oxted in the Darley July Cup at Newmarket.

Fallon, son of former champion Kieren, was the leading apprentice last season and was making his breakthrough at the highest level aboard the Roger Teal-trained victor.

He made a bold move over two furlongs from home on the four-year-old, and had a length and a quarter to spare over the field.

His father famously never won the Group One and neither has Frankie Dettori, who chased him home on Denis Hogan’s Irish raider Sceptical.

Golden Horde, the 2-1 favourite, was back in third for Clive Cox, but it was Oxted (12-1) who wrote his and his young jockey’s name into the history books.

Fallon, riding in just his second Group One after finishing unplaced on Les Hogues in the 1000 Guineas, is still an apprentice but was unable to use his claim in such exalted company.

Oxted won the Portland Handicap last September, but reappeared this year with a win in the Group Three Abernant Stakes.

He was taking another big step up in grade but handled it with aplomb, always looking in control down the centre of the track for his young jockey.

Golden Horde had the seemingly preferred position on the rail, but had no answer to Oxted running into the dip and it was Sceptical, who also went close at Royal Ascot, who chased home the impressive winner.

Fallon said: “I’m speechless. I was just a passenger on a very good horse today. Mr Teal and his team have done a very good job with him.

“I can’t believe I’m a Group One-winning jockey as an apprentice, never mind such a young age. I owe Roger so much for keeping faith with me.

“The feel he gives you this year, I couldn’t tell I rode him last year, he feels a different horse

“He’s wintered very well. I finished second on him here before he won the Portland, so we knew he’d handle the dip.

“There was a bit of pressure, but I’d spoken to my dad beforehand, my jockey coach Michael Tebbutt and my boss Mr (William) Haggas, so I’m very lucky to have the support around me.

“Dad just told me to jump out in a straight line and kick going into the dip and then see what’s underneath me. What a horse.