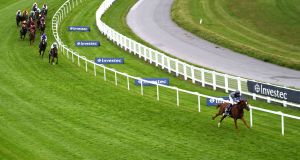 Serpentine and Emmet McNamara string them out en-route to victory in the Epsom Derby. Photograph: George Selwyn/PA

The ITV folk were so stunned by Serpentine’s victory in the Derby you’d have been left thinking it was an upset on a par with, say, Cowdenbeath winning the Champions League. “There’s a stunned silence here at Epsom,” said Francesca Cumani, although, in truth, there had been a stunned silence at Epsom all day because nobody was there. Apart from the horses, their humans, ITV and a few stragglers.

So, when Serpentine romped home you would have heard a pin drop if it wasn’t for the gasps from the ITV team, the winner having barely got a mention pre-race, aside from Francesca rudely dismissing him as “a slightly immature looking individual”.

Mind you, he wasn’t alone in being overlooked, indeed for a time you’d have been wondering if it was literally a one-horse race.

“There is no Queen here today - but we have English King!”

So said our host Ed Chamberlin when he welcomed us to the day’s racing, 94.2 per cent of the Derby chat focussing on English King’s prospects.

Tim Walker, father of trainer Ed, was, he confessed, feeling nervous, but that was nothing on his wife Jilly. “She rose at half past five this morning, had a cup of tea and she’s been rather jiggly ever since,” he said.

But there was to be no Derby joy for Jiggly Jilly in the end, English King finishing fifth while Serpentine went out like the hammers of hell and neglected to allow the chasing pack catch up.

With two furlongs to go, our commentator Richard Hoiles couldn’t quite believe what he was seeing” Still Serpentine?!”

Francesa, another English King devotee, was mightily peeved. “We didn’t get a horse race,” she grumbled, not even congratulating the slightly immature looking individual even though it was hardly his fault that his rivals didn’t fret when he opened up that gap, all the time assuming he’d finish the race much like Norwich City are finishing their Premier League season. Limply.

A rather more anticipated triumph came in the Oaks earlier in the day when Love won by just the nine lengths, a race that featured commentary from Richard that made him sound like a pre-marriage counsellor.

“How long can Passion last?!

Love is powering away!”

These nuggets of information were provided by Brough Scott in a piece designed to prove to us that thoroughbred racehorses are superior athletes to humans. “Just check these facts out and shake your head in wobbly wonder,” he said, but neglected to mention the pesky fact that horses have twice as many legs as humans, so little wonder they run quicker.

Luke Harvey, another of the ITV team, was in an admiring mood too ahead of the 2.25, purring over the thing of beauty that is Jack’s Point. “Look at the size of him and how broad he is! He doesn’t look too dissimilar to my camera man, actually. Look at the hind quarters on him!” Whether he was referring to the horse or the camera man’s hind quarters, he didn’t say, but Jack’s Point trailed in fifth out of six runners, his heart evidently weighing half the size of a cow’s.

You’re Hired didn’t have the best of runs either in the 3pm, also coming in fifth, which completed a disappointing day for his owner, George Materna.

“I’ve been reading about you,” said Ed to him when they chatted via Zoom, “just after the war you escaped Czechoslovakia with your parents!”

If George felt offended, he showed it. “I was born in Hull in 1953! I had nothing to do with the escape!”

Ed apologised for suggesting that George was, well, a slightly mature looking individual, his blushes suggesting he’d just ended up with 30 per cent more red blood cells in his cheeks.

1 Sligo meeting abandoned after four races due to safety concerns
2 Nicola Sturgeon ‘furious’ as players’ pub trip sees Aberdeen game postponed
3 A new putter for Tiger Woods is something worth noting
4 The game they loved so well: How cricket united Hume, McGuinness and McCann
5 Elina Svitolina and Kiki Bertens pull out of US Open
Real news has value SUBSCRIBE