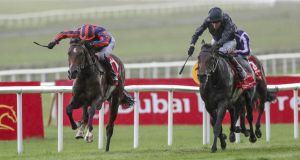 A Dubai Duty Free Irish Derby like no other got a typical outcome on Saturday when Santiago led home an Aidan O’Brien clean-sweep at the Curragh.

Santiago, the 2-1 favourite, led home a O’Brien 1-2-3-4 from stable companions Tiger Moth, Dawn Patrol and the 33-1 outsider Order Of Australia.

It was a 14th Irish Derby victory for the champion trainer and the seventh time he has filled the frame in Ireland’s premier classic.

But in an unprecedented year with a ‘domestic only’ Irish Derby forced behind closes doors due to coronavirus, and taking place a week before Epsom, the eventual result was very much business as usual.

Seamus Heffernan had the pick of O’Brien’s six runners and the 47-year-old veteran rider’s judgement was proved spot on.

In a race run in heavy rain, Santiago, a Royal Ascot winner over a longer trip just eight days previously, made light of the conditions to burst through pack and into the lead early in the straight.

His 11-1 stable companion Tiger Moth emerged as his big danger and pressed Santiago to the line where just a head separated the pair.

It was an exciting blood and thunder finish to a €750,000 contest run in an atmosphere best described as sterile otherwise.

With only essential personnel on-track, and health screening protocols rigorously supervised, at times the dominant noise at the track was the eerie ‘whirring’ noise from the roof of the stand.

That problem first emerged when the revamped €81 million facility was opened last year. It returned on another big day as a strong wind swept across the Curragh.

It added to an overarching sense of functionality about the 154th renewal of the famous race.

Afterwards O’Brien paid tribute to all sectors of the sport which resumed behind closed doors just 19 days previously.

“It’s a great credit to everyone for getting racing back. There’s an awful lot of people depend on it, a lot of livelihoods. It’s a strange time but times will change and owners will get back racing.

“It’s great that it’s happening and a big credit to everyone that’s making it happen. Hopefully there will be spectators back soon,” he said.

“He (Santiago) is a lovely hardy horse and it was a big call by the lads (Coolmore Stud owners) to run him so close after winning at Royal Ascot,” O’Brien added.

The trainer said the winner had “done absolutely nothing, just did a couple of canters” in the interim.

But the son of Authorized, who broke his maiden at Listowel as a two-year-old, bounced back into action with a vengeance. He is now a general 9-4 favourite for more classic glory in the St Leger.

“It was very difficult and very unfair on the horses really (the revised racing calendar.) Some of them, they were maidens still. They were getting pitched in at the deep end. It was tough on them.

“There is only one Irish Derby. We thought it would be wrong not to let them take their chance and we’ll all find out together,” O’Brien. said.

For Heffernan it was a fourth win in the race and a 33rd Group One success in all.

“He’s a tough horse, a mile and six (Queen’s Vase) back to a mile and a half in the Curragh really suited me. I was always comfortable.

“I would have liked a better draw and a cleaner slot but it worked out. I took a gamble dropping hmi in but if you go forwards and you get trapped wide he’s a horse that gets competitive. He wants to go and race and win,” the rider said.

It was an 11th Irish Derby triumph in the last 15 years for O’Brien who first won it in 1997 with Desert King. Afterwards he suggested the Leger as a likely stop for his latest winner.

“It looks a lovely race for him. We have the second and third there too so we will see what the lads want to do. They are two lovely horses (Tiger Moth and Dawn Patrol.) They are two babies and progressing. In a month’s time they will be even better we think,” he said.

As well as the frustration of coming up narrowly short of Derby glory, Tiger Moth’s jockey Emmet McNamara also felt the wrath of the stewards. They handed the rider a two-day suspension for his use of the whip on the runner up.

Wayne Lordan was out of luck in the Derby where Arthur’s Kingdom slipped jumping from the gate and ultimately faded to ninth. However the jockey otherwise enjoyed a hat-trick on the card.

Ballydoyle’s Serpentine ran away with the opening maiden to the tune of nine lengths while Lordan helped Joseph O’Brien to a Group Three double.

Twilight Payment landed the Vintage Crop Stakes while Buckhurst dominated the three-runner Alleged Stakes from the front. It was a third course and distance win for Buckhurst.

“He’s come forward and going back to ten furlongs suited him. He’s always been a good horse but it’s nice to get him back on track. He’s uncomplicated and well able to go along (in front). Wayne gave him a lovely ride.

“It was a small field but they are three good horses in all fairness. I felt he won well at the line. The Tattersalls Gold Cup looks the obvious race for him now,” said Joseph O’Brien.

Ancient Spirit edged out Buckhurst on their previous start at Navan and he too hit the mark on Friday evening, landing the Listed Celebration Stakes under Shane Foley.