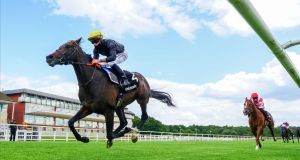 Frankie Dettori will face one of Epsom’s most demanding tactical challenges for the first time in his career on Saturday after the draw for the Derby placed his mount English King, the favourite, in stall one, on the outside of a 16-strong field as they turn right and uphill in the early stages of the race.

English King will be Dettori’s 25th ride in the Derby as he looks for his third win in the Classic, and his first from stall one, which has not supplied the winner since Oath, with Kieren Fallon in the saddle, beat 15 opponents in 1999. Dettori was alongside Fallon in stall two that year, aboard the brilliant Dubai Millennium, who was sent off favourite at 5-1 but suffered the only defeat of his 10-race career as he trailed home in ninth place.

It is unusual for the draw to have much effect on the outcome of a race over 12 furlongs, but Epsom is a highly unusual course which places unique demands on an inexperienced three-year-old colt. The Derby field climbs and turns steadily to the right for the first quarter mile before returning towards the inside rail to prepare for the steep descent to Tattenham Corner. A quick start from one gives a jockey more options, but it is still dangerously easy to get stuck on the rail behind tiring opponents as the race starts to develop in earnest from on the run to the home turn.

A total of 185 horses have started from stall one over 12 furlongs at Epsom since 2003, and just 11 – or 6 per cent – crossed the line in front. 22 horses, meanwhile, have started favourite or joint-favourite for a 12-furlong race from the outside stall, and just three have won. All three – including St Nicholas Abbey in a five-runner race for the 2011 Coronation Cup – were racing in single-figure fields, while all eight favourites at the Derby trip since 2003 in double-figure fields have been beaten.

English King’s price eased slightly with several bookmakers as a result of his draw but the Lingfield Derby Trial winner remains clear favourite to give Ed Walker, his trainer, victory with his first runner in the premier Classic. English King is top-priced at 11-4, just over a point shorter than Kameko, Andrew Balding’s 2,000 Guineas winner, at 4-1, who will be in stall 11 with Oisin Murphy, the champion jockey, in the saddle.

Mogul, who is drawn alongside English King in stall two, is now the shortest price of Aidan O’Brien’s six runners in Saturday’s race as he is the mount of Ryan Moore, the trainer’s stable jockey. Mogul was soundly beaten behind Pyledriver, a 16-1 shot for the Classic, in the King Edward VII Stakes at Royal Ascot last month, but is now the 6-1 third-favourite with two more of O’Brien’s runners, Russian Emperor (stall six) and Vatican City (in eight) on 7-1 and 10-1 respectively.

Highland Chief (in 13), representing Oliver Cole and his father Paul, who saddled Generous to win in 1991, is also a 16-1 chance, with the nine remaining runners priced at 25-1 and above. - Guardian

Madigan has Ireland caps in sight; view from Melbourne’s second lockdown 07:06
View from Melbourne: Sporting fabric of the city suffering from second lockdown 06:30
Madigan’s primary goal is Ireland caps after switch to Ulster 06:00
Seán Moran: It won’t take much before cancelling All-Ireland looks like a solution 06:00
My sporting disappointment: Battered, bloodied, broken by The Wall 06:00
Here is your handy guide to sport on television this week