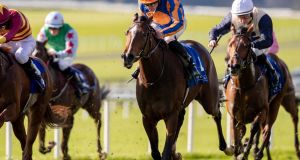 Aidan O’Brien was beaten to the Classic punch by his son Donnacha who saddled Fancy Blue to lead a memorable Irish clean-sweep of the French Oaks on Sunday.

The 21-year-old former dual-champion jockey joined his father, and his older brother Joseph, in the training ranks this season and had saddled just three winners in Ireland prior to Sunday.

However, just a day after his father secured a record eighth Epsom Derby success with Serpentine – and an eighth Epsom Oaks into the bargain with Love – it was O’Brien Jnr who bridged a 50-year gap in France.

The statistic about Sweet Mimosa in 1970 being the only previous Irish-trained winner of the Prix de Diane got erased with a vengeance at Chantilly.

Although Peaceful had previously beaten Fancy Blue in the Irish 1,000 Guineas this time O’Brien Snr once again had the bittersweet experience of giving best to his children.

In 2018 Joseph saddled Latrobe, ridden by Donnacha, to win the Irish Derby with horses trained by their father filling the next four places.

“She’s a very good filly and Pierre gave her a great ride,” reported Donnacha O’Brien, who was twice champion jockey and rode nine Group One winners including four Classics during a short but spectacular career in the saddle.

“We used the Irish Guineas as a prep for one of the Oaks. She finished that race well so the obvious step was to go up in trip. There was some great prizemoney in France and we got to avoid Love so this was the obvious target,” he added.

The Irish Oaks later this month, or the Nassau Stakes at Goodwood, are now possible options for Fancy Blue.

Earlier on Sunday Aidan O’Brien once again failed to add the French Derby to his Classic collection with his two runners finishing out of the frame behind the English winner Mishriff in the Prix du Jockey Club.

They included Fort Myers who never landed a blow for Saturday’s hero of the hour at Epsom, Emmet McNamara.

It had been a very different story less than 24 hours earlier when the largely unheralded jockey delivered a vintage ride from the front to land racing’s ‘Blue Riband’ on Serpentine.

Quickening down the hill the 25-1 outsider built up a lead of almost 15 lengths early in the straight which proved to be unassailable.

Serpentine was chased home by the 50-1 Khalifa Set with O’Brien’s 66-1 outsider Amhran Na Bhfiann hanging on for third. In a unique Derby held behind closed doors and a month late due to coronavirus the trifecta paid almost 56,000-1.

If there was widespread criticism of a lack of initiative for riders who left McNamara have a ‘freebie’ in front, it is perhaps no surprise the winning jockey got his fractions perfect from the front.

The 30-year-old son of Co Limerick trainer Eric McNamara boasts an unusual profile for a Derby-winning jockey, having partnered just a handful of winners in recent years.

Instead the former champion apprentice has become one of O’Brien’s top work-riders at Ballydoyle over the last six years. He hasn’t wasted his free time in that role either.

McNamara’s ‘LinkedIn’ page outlines how he secured a first-class honours degree in Accounting & Finance at Dublin’s Griffith College in 2018.

The jockey had come up just short in the Irish Derby a week earlier when Tiger Moth was just beaten by Santiago but didn’t fear his shot at big-race glory had gone.

“Luckily when you are in Aidan’s, you have the chance of getting on this type of horse at different stages through the years that you are there, so I didn’t think when I pulled up the other day, ‘that’s it, gone forever’,

“I thought a couple of weeks ago that this could possibly be a big year, just with the way things worked out, and that is the way it is after working out – second in an Irish Derby and to win an English is unbelievable. I can’t imagine it will ever happen again, so I’m going to try to savour it,” McNamara said.

Serpentine might not have been widely expected but he will always be the one that delivered his trainer a record eighth ‘Blue Riband’ victory.

However, it is O’Brien’s Oaks heroine Love who has been cut to 7-2 favourite in some lists for October’s Prix de l’Arc de Triomphe after Enable’s Eclipse Stakes defeat on Sunday behind Ghaiyyath.