Dettori bidding to guide Sceptical to fairytale Grade One glory 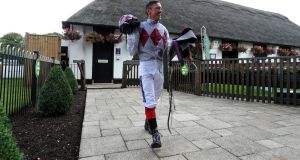 Frankie Dettori: will be aiming to add the July Darley Cup to his glittering big race CV when he rides Sceptical in the Group One feature at Newmarket. Photograph: David Davies/PA

Frankie Dettori gets a second chance to deliver a fairytale Group One outcome to the Sceptical story in Saturday’s Darley July Cup at Newmarket.

There has been no more engrossing episode in this singular season than how Godolphin’s unraced cast-off was snapped up for just £2,800 by his new Irish owners and transformed into one of Europe’s top sprinters.

After operations on his wind and to geld him, plus five races later, the new model Sceptical rocked up at Royal Ascot and momentarily looked to have the prestigious Diamond Jubilee Stakes at his mercy.

That was when Dettori, who was riding the Denis Hogan-trained star for the first time, sent him to the front over a furlong out past his rival Hello Youmzain.

That the latter fought back to win and Sceptical finished a head and a neck back in third had the Italian jockey pondering the frustration of ‘what if’.

“Frankie admitted he got it wrong at Ascot and went too soon. But I wouldn’t blame him because when he hit the front I was delighted and thought he would keep going,” Dubliner James McAuley, in whose colours Sceptical runs, has said.

For a horse who had previously shown blinding speed over five furlongs at Naas on his first turf start, perhaps it was no surprise Sceptical’s run petered out a little at Ascot.

It is a stiff six furlongs at Ascot while Saturday’s July course at Newmarket is much more a test of raw speed. Softer ground won’t be ideal for the Irish star but the most crucial factor of all may be that Dettori now knows him.

The world’s most famous jockey hasn’t carved out such a stellar career by making the same mistake twice.

It’s easy to imagine him desperately trying to play his cards as late as possible against opposition that again includes Hello Youmzain as well as the Commonwealth Cup winner Golden Horde.

Dettori will hardly lack for other motivation too. The July Cup is the sole major domestic prize missing from his CV. Along with the Melbourne Cup, it might just be the big race he craves most.

“I’m a Newmarket boy so winning the July Cup would mean so much to me,” Dettori said. “Everyone knows it’s the only Group One I’m yet to win in the UK and it looks like I’ve got as good a chance as I’ve ever had this year.”

He and the Sceptical camp are coming from opposite ends of the accomplishment spectrum in Group One terms but may end up helping each other into the winners’ enclosure of Europe’s top sprint.

Aidan O’Brien has the outsider Southern Hills as he tries to complete three-in-a-row in the July Cup and, on the back of Serpentine’s Derby success, only the foolish will dismiss him completely.

On Sunday though O’Brien’s Group One focus switches to France where both Arizona and Lope Y Fernandez line up in the Qatar Prix Jean Prat at Deauville.

The race due off at 3.25 Irish-time is topped by last year’s outstanding juvenile champion Pinatubo who drops back to seven furlongs following placed efforts in the Guineas and the St James’s Palace.

Too Darn Hot successfully pulled that move last season and Pinatubo is likely to be odds-on to do that same.

He is opposed by the Jersey winner Molatham as well as leading local hopes Wooded and Tropbeau.

The Jean Prat is absent from O’Brien’s own glowing CV and Ryan Moore has picked Arizona from his pair of runners.

That leaves the former French champion jockey Ioritz Mendizabal to team up with the Irish Guineas third Lope Y Fernandez. The veteran rider memorably stepped in for a classic ‘spare’ last Sunday by landing the French Derby on John Gosden’s Mishriff.

The Group Three Meld Stakes is Saturday’s home feature at Leopardstown and includes a rare cross-channel runner in the Group One winner Zabeel Prince.

The 2019 Prix d’Ispahan hero hasn’t run this year but a 117 rating suggests he could be a step above his opposition. They include the progressive handicapper Patrick Sarsfield and Ancient Spirit who stretches his stamina to nine furlongs.

Perhaps the most interesting runner lining up however will be the 2017 Melbourne Cup hero Rekindling and his return to action in an amateur race.

Rekindling’s only subsequent start to his Flemington highlight was last year when last in a Group One in Australia, after which there were reports of a likely stud career. However he’s back with his old trainer Joseph O’Brien and ready to resume racing.

The €14,5000 prize fund for the mile and a half contest is a long way from the near €2.5 million he won for landing ‘the race that stops a nation. However it is a new start.

Dundalk and its relaid all-weather surface are back in action on Sunday with the rescheduled Woodford Ballysax Stakes the feature.

The Jersey Stakes runner-up Monarch Of Egypt is extended out to ten furlongs but on a weekend featuring Sceptical, his biggest threat could appropriately be from another bargain buy by the McAuley-Hogan team.

Dalvey was a £6,500 purchase from Juddmonte and after three runs for his new connections is already rated 99.