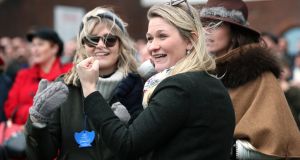 Racegoers returning to Ireland from Cheltenham will be reminded at points of entry of the need to self-isolate if they show symptoms of having the coronavirus, Tánaiste and Minister for Foreign Affairs Simon Coveney signalled on Thursday.

“If Cheltenham was being held in Ireland I don’t think it would be on, quite frankly,” Mr Coveney told RTÉ’s Prime Time.

“We have committed today in Government that we are going to introduce new health interviews if you like in our airports and ports so that people that are coming into Ireland will effectively be informed and have a health conversation around Covid-19 before they enter the country including the people coming back from Cheltenham”.

For most punters who spoke to The Irish Times at Cheltenham, the spread of the virus - also known as Covid-19 - was far from their minds.

Peter Timmons, from Co Meath, said he wasn’t worried about the threat of the virus spreading in the close quarters of the racing stands. “I’m too interested in the races,” he said.

Sam Kerrigan, also from Co Meath, said he didn’t “believe the hype — I just don’t think we’re going to get it. But if you read about it you’d be worried”.

They were speaking amid increased criticism in Ireland at the festival organisers’ decision to allow Cheltenham go ahead. As Taoiseach Leo Varadkar announced more severe measures to contain the spread — the closure of schools, colleges and the cancellation of large scale gatherings — people on social media have become more vocal about the possibility of Irish racegoers contributing to the spread of Covid-19 when they return home.

Three retirees — all seasoned racegoers — were sanguine about the situation.

Leonard Kinsella, another Co Meath man, said “I’m 75 — I have to be worried about it” before adding “but, it’s like worrying about getting old”. Pat Baron, from Waterford, said that while he was concerned about the possibility of a backlash back at home, he had been coming to the races for years, and “it’s a pattern, you don’t want to change your lifestyle”.

Another punter, who travelled from Kilkenny, claimed it was “madness what’s going on at home — life needs to go on”, he said, in reference to the Government’s announcement.

Despite a slightly diminished turnout, the festival enjoyed its busiest day so far, with a crowd of 65,218 undeterred by the news from Westminster and Dublin of fresh control measures against the virus. The compared to record turnout on this day last year of 67,821.

As the day began to wrap up, British prime minister Boris Johnson announced his government’s latest advice for containing the virus: self isolating when feeling unwell and staying away from the elderly.

Many were surprised to learn that Cheltenham looks set to go ahead for its fourth and final day, however, considering the increasingly stringent measures being implemented across Europe.