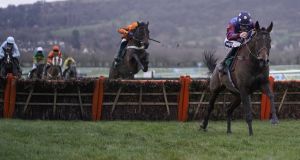 Aidan Coleman and the impressive Paisley Park will be hotly fancied to retain the Stayers’ Hurdle at Cheltenham. Photograph: Alan Crowhurst/Getty Images)

Of all Cheltenham’s championship events the Paddy Power Stayers’ Hurdle boasts a track record of champions successfully defending their title, so Paisley Park fans are able to point to history for further encouragement ahead of Thursday’s feature.

Prior to Big Bucks and his freakish four in a row (2009-12) the Stayers’ roll-of-honour already had Inglis Drever’s triple successes and Baracouda’s back-to-back wins in 2002-03. Galmoy also won back-to-back in 1987-88. Crimson Embers had four years between his two victories in ’82 and ’86.

Paisley Park’s resounding victory a year ago has been backed up this season by a level of performance that suggests he’s even better now. It makes the task facing his 14 rivals on Day Three of the festival look all the more intimidating.

They include half a dozen Irish challengers with Willie Mullins’s pair Bacardys and Penhill joined by last year’s Ballymore winner City Island. Martin Brassil sends him back to flights after two underwhelming runs over fences.

Matthew Smith’s bargain buy Ronald Pump and the Ronan McNally-trained The Jam Man represent a rare visit to the big stage for two of the sport’s smaller operations. It’s a huge ask for both but even so they’ll still have to concede the romantic spotlight to one of racing’s behemoths.

Michael O’Leary’s Gigginstown Stud operation isn’t renowned for sentiment but the prospect of an Apple’s Jade victory is one to savour for admirers of one of the best mares to grace the scene in modern times.

A total of 11 Grade One victories – including the Mares Hurdle here in 2017 – are statistical evidence of the impact she has made. It also extends though to a rare depth of public affection for an eight year old who at her peak raced with a rare flamboyance.

Crucially, however, that peak hasn’t been seen in over a year.

Instead her first two starts this season had connections speculating about retirement. A glimpse of the old Apple’s Jade at Leopardstown over Christmas briefly quenched such talk. But getting pulled up at Gowran last time makes Thursday’s race look something of a last throw of the dice.

First-time blinkers and a new jockey in Richard Johnson are being employed to try and rekindle the old fire.

However, if that doesn’t work the curtain could come down on one of the finest careers of recent years. If it does, and an unlikely victory occurs to bring the house down, it could represent a perfect retirement cue anyway.

The greatest obstacle to such a fairytale outcome remains Paisley Park.

Unbeaten in his last seven starts, and a revelation since properly upped to three miles, the eight year old has been imperious in two wins this season at Newbury and Cheltenham.

January’s Cleeve Hurdle saw circumstances conspire against him somewhat yet he ultimately wound up winning with authority.

That’s the stamp of an exceptional runner and it’s all but impossible to pick holes in the case Paisley Park presents for his title defence.

“It doesn’t matter how the race is run, he is very able to adapt. He’s not slow. There’s an illusion of that because he’s running over three miles and a bit because of his style. But actually when it comes to it he’s got plenty of boot,” she reported.

“You need luck in running. You need everything to go well. But he’s a pretty solid favourite. In terms of Paisley Park’s rivals there would need to be a big step up from where they’ve been and what they’ve shown so far.

“I think he’s as good as we’ve ever had him and hopefully that will be good enough,” Lavelle added.

It makes the most likely outcome being the addition of Paisley Park’s name to those Stayers champions up to defending the crown.