Cheltenham: Champ fails to live up to top billing 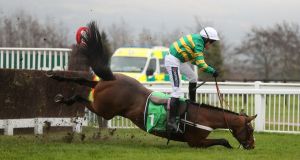 Champ, ridden by Barry Geraghty, takes a tumble with the winning line in sight. Photograph: PA

The new year opened with another drama-packed card at the home of jump racing, featuring a three-way photograph, two stewards’ inquiries and a controversial disqualification which is almost certain to be appealed.

But the most significant moment of the day came at the second-last fence, where the much-vaunted Champ barely took off and crashed out with a Grade Two prize seemingly at his mercy.

Sent off at odds of 4-9, Champ was four lengths clear of the field and would surely have prevailed, considering that the eventual winner, Midnight Shadow, appeared very tired in the closing stages. “He had it totally under control,” was the verdict from Champ’s trainer, Nicky Henderson, who later reported the horse to be “slightly sore in his shoulder”.

It meant that Barry Geraghty suffered late and high-profile falls on back-to-back rides, as this was his first action since hitting the turf with Sizing John at Punchestown on New Year’s Eve.

“I’d say he was looking in the stands rather than at what was in front of him,” reported the unscathed jockey. “It was a novicey fall, he’d jumped brilliantly until then.”

Champ’s connections had hoped for a more straightforward outcome, allowing them to go straight to the RSA Chase at the Festival here in March, for which he remains a strong favourite at 7-2. Now Henderson must consider whether another outing is needed, possibly in Ascot’s Reynoldstown Chase.

Harry Skelton was also having a hairy time on jump racing’s rollercoaster. He was delighted to get a win out of Protektorat in the opening novice hurdle, only to lose the race in the stewards’ room, where he was also handed a four-day whip ban. Three races later, he was wreathed in smiles after Oldgrangewood delivered his trademark strong finish to prevail by inches over Saint Calvados and Lalor in the Paddy Power Handicap Chase.

Skelton in the wars

“It’s been a funny old hour,” said Skelton, having clearly learned restraint and understatement from his many years in the saddle. He and his brother Dan, in Florida on holiday, are expected to appeal the disqualification of Protektorat, even though it means an unwanted return to the High Holborn offices of the British Horseracing Authority where Harry spent an entire day just before Christmas appealing a 10-day riding ban, successfully.

Protektorat was judged to have taken the ground of Imperial Alcazar, who was switched by Paddy Brennan and finished well to be beaten just a head. Brennan never stopped riding in the incident at the final flight, leading to many surprised faces when the verdict was announced.

The inquiry was an early blooding for the new chief steward, South African Shaun Parker, on his first day working at a British racecourse. But his colleague, Simon Cowley, insisted the decision did not represent new thinking on the interference rules.

“Although Protektorat has not made contact with Imperial Alcazar, he’s forced Paddy Brennan to come off his intended running line, costing him momentum and a little ground,” said Cowley. “We take that into account and also the fact that Brennan’s mount was making ground all the way to the line and, possibly a stride after the line, he was in front. We think that what happened cost him more than the distance he was beaten.”

Skelton was cautioned for careless riding.

Sometimes the game gives back to those who have been wronged and so it was for connections of Doing Fine, who “won” the voided London National. Now 12, the horse had enough left to prevail in the Markel Insurance Chase under his young pilot, Philip Donovan.