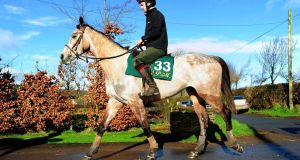 Carter McKay will spearhead Willie Mullins’ team of five from the 36 entries in the Weatherbys Champion Bumper as the trainer looks for an incredible ninth win in the Cheltenham Festival race.

Having ridden his first winner himself in 1996 when Wither Or Witch was successful, the likes of Alexander Banquet, Florida Pearl and Champagne Fever all gained their first notable wins in the race.

Carter McKay is owned by Sheikh Fahad’s Pearl Bloodstock Ltd and has scored at Leopardstown and Naas.

“Carter McKay goes there, Ballyward pulled a muscle the other day, so we’ll see how that comes out,” said Mullins, who was forced to rule ante-post favourite Getabird out of the race.

“Next Destination goes there and I’ve entered the two fillies Red Hot Filly Peppers and Mystic Theatre, so we’ll see what happens.

“Carter McKay could look the one on his form of the last day. He’d been doing nice work at home before Naas and his performance was better than I hoped, but you don’t go expecting performances like that.

“That performance would compare to anything. A horse that can win around Naas doing that is a fair machine. I wonder if Joseph’s (O’Brien, West Coast Time) horse ran up to speed.

“Next Destination works well and Ballyward is fine, if he recovers from the pulled muscle.”

Nicky Henderson, who has never won the race, has entered Daphne Du Clos, Dan Skelton has given Cause Toujours the option with Irish Roe also there for the small yard of Peter Atkinson.

Western Ryder, West Coast Time and Debuchet are others in the mix.