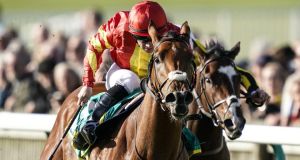 Iridessa was a surprise winner of the bet365 Fillies’ Mile at Newmarket.

Joseph O’Brien’s youngster made a big impression when making a winning debut at Killarney in July, before finishing fifth in the Debutante Stakes at the Curragh and third in a Listed race at Leopardstown.

She looked to have her work cut out stepped up to Group One level, but struck gold at 14-1 in the hands of Wayne Lordan.

Pretty Pollyanna, winner of the Duchess of Cambridge Stakes and Prix Morny during the summer, was bidding to bounce back from a slightly disappointing effort in the Cheveley Park a fortnight ago and looked the likeliest winner when cruising to the lead under Danny Tudhope.

However, tackling a mile for the first time, she gave best inside the final furlong and it was left for Iridessa and Aidan O’Brien’s 5-2 favourite Hermosa to fight it out.

Iridessa quickened up best and was always doing enough to hold Hermosa at bay by a length and a half. Pretty Pollyanna was another three-quarters of a length back in third.

“She did it well and Wayne gave her a great ride. She travelled well and I thought she quickened up well. We’re delighted.

“She ran well in the Curragh in a very messy race and then got drawn almost widest of all at Leopardstown, so on her last two runs she never got a fair crack at it really. Today was a fairly-run race and she showed how good she is.

Betfair went 16-1 about the winner for the Qipco 1000 Guineas, with RaceBets going 20-1 about her chance in the Investec Oaks.

O’Brien added: “She’s definitely well entitled to line up in it (1000 Guineas). Being by Ruler Of The World, she’s probably more of an Oaks filly, but we’ll get today out of the way and worry about that when the time comes.

“We’ll enjoy today and give her a nice break through the winter and dream about next year.”

Aidan O’Brien said of Hermosa: “She ran a lovely race and we were delighted. We will train her for the Classics.

“I think she is versatile enough. That was good to firm ground today and I would say she would handle soft ground.

“I’m delighted for Joseph and she (Iridessa) is home-bred.”

Michael Bell was pleased with Pretty Pollyanna’s effort in defeat.

He said: “That was a fantastic run, it was just a pity the Irish had to invade!

“She looked as though she got the trip and it opens up options for next year. It was her first time running beyond six furlongs, so it was a different style of racing, but she has run a very good race.

“It is early to say, but a (Guineas) trial would make sense as that would be over seven furlongs.

“I would say she would almost certainly run in a trial.”

Earlier Limato continued his resurgence by successfully defending his crown in the Godolphin Stud And Stable Staff Awards Challenge Stakes.

Henry Candy’s stable star won twice at Group One level in 2016, landing the July Cup and the Prix de la Foret, but his only victory of last season came in this seven-furlong Group Two.

The six-year-old was disappointing in the first half of the current campaign, including over a mile in the Lockinge at Newbury and the Queen Anne at Royal Ascot and again failing to fire when bidding for a second July Cup.

However, confidence-boosting Listed-race wins at Newmarket and York got his career back on track and he completed his hat-trick in some style in the hands of Harry Bentley.

The 7-4 favourite was always travelling within his comfort zone and never looked in danger of being caught after striking the front, scoring by a length and a quarter from Zonderland.

Sergei Prokofiev could be bound for the Breeders’ Cup after outclassing his rivals in the Newmarket Academy Godolphin Beacon Project Cornwallis Stakes.

Aidan O’Brien’s colt looked a top-class prospect after registering successive wins in the spring and was far from disgraced when third behind Calyx and Advertise in the Coventry Stakes at Royal Ascot.

He was a shade disappointing on his two most recent outings in the Phoenix and Middle Park Stakes, but showed his true colours in this five-furlong Group Three on the Rowley Mile under a confident ride from the trainer’s son, Donnacha.

The 3-1 favourite was still at the rear of the field racing inside the final two furlongs, but made rapid headway once switched wide and passed the post a length and a quarter clear of Well Done Fox, without being asked for maximum effort.

O’Brien said: “He was always so quick at home. The first time we stepped him up to six furlongs he lost that bit of brilliance. It’s amazing the difference a furlong makes — obviously he is really a five-furlong horse.

“We were going to let him relax wherever he was. Donnacha did give him a very good ride. It’s very rare to come from the back like that.

“It’s possible he could go to America (Breeders’ Cup Juvenile Turf Sprint). He has had a busy enough campaign and it might be possible we put him away for next year.”

The father-son combination looked to have a strong chance of completing a quickfire double in the Godolphin Lifetime Care Oh So Sharp Stakes with Dundalk maiden winner Frosty.

Successful on her third start at Beverley last month, the American-bred filly was pressed by Angel’s Hideaway late on, but passed the post three-quarters of a length to the good under William Buick.

Buick said: “She travelled very smoothly. It was very windy, but she had a nice bit of cover and did it well.”

Asked whether he felt Mot Juste could be a 1000 Guineas contender, the jockey added: “I’m sure the connections will be thinking that way and rightly so. They can dream through the winter and I see no problem with her getting the mile.”