Can Roaring Lion win Breeders’ Cup Classic where others failed? 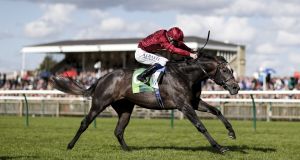 Roaring Lion: Europe’s outstanding three-year-old colt of 2018 is the latest to take a tilt at the Breeders’ Cup Classic in Louisville, Kentucky. Photograph: Alan Crowhurst/Getty Images

It’s 25 years since the French no-hoper Arcangues sped down the Santa Anita stretch and won the Breeders’ Cup Classic, leaving commentator Tom Durkin to exclaim: “What the f**k is that?”

Okay, he didn’t really. What he said was, “A huge upset looming here as Arcangues comes flying on the outside . . . here’s Arcangues to win it, in an absolute shocker – he’s 99-1!”

It still sounds on the replay like the world’s going to fall in. Durkin might even have been forgiven for employing the profane terms everyone else was thinking, especially if he’d known the real odds were 133-1.

Racing on dirt is as American as apple pie. Most of the rest of the world race horses on turf. But, like the World Series and Super Bowl, America’s sporting horizons often come with a garish set of parochial blinkers.

It helps explain why, unlike any other major racing jurisdiction, it’s okay in the US for horses to run on the sort of drugs that would have them immediately thrown out if found in their system on race day anywhere else.

Over $30 million in prize money will be up for grabs over 13 Grade One races this Friday and Saturday when the 35th Breeders’ Cup caravan pulls into Louisville, Kentucky.

Churchill Downs is home to America’s most famous race, the Kentucky Derby. But America’s most competitive race has become the $6 million Classic. It will be run over the mile-and-a-quarter “Durby” track on Saturday night.

It’s where a trio of top European performers, including Aidan O’Brien’s Mendelssohn, will try to pull off another “Arcangues” on America’s most sacred dirt. Whether any of them manages it could come down to an element even those indifferent to racing can recognise: character.

Because if that’s easy, then quantifying the scale of the task in transferring running ability from grass to dirt is much more difficult.

The best analogy is perhaps asking top rugby union players to move code and start playing top-level rugby league from scratch. The basic requirements look the same but the devil is in the detailed nuances.

For almost two decades O’Brien has flung many of Coolmore Stud’s greatest turf stars at the Classic. They’ve all come up short.

Giant’s Causeway finished runner-up 18 years ago. Declaration of War was third in 2013. The legendary Galileo could manage only sixth in 2001. Worst of all, George Washington was fatally injured on the Monmouth Park dirt in 2007.

Henrythenavigator did finish second to another Euro, Raven’s Pass, in 2008. But that was on an artificial surface that favoured grass runners. Spooked US authorities quickly binned that synthetic experiment. So Arcangues remains the sole European runner to win the great race on dirt.

And that’s the Classic conundrum for Coolmore and others. Arcangues was no superstar in Europe. But, given a shot to nothing on dirt, he beat the best of America. The transfer was so spectacular, the theory goes a real top-shot should be up to doing the same.

Yet in practise it still hasn’t happened. Some exceptional talents have got off the plane and successfully adapted to dirt in other Breeders’ Cup races.

But for mature three- and four-year-olds, at the end of a busy year, thousands of miles from home, on an alien surface, it has ultimately proved too much in the Classic. An outstanding Arc winner like Sakhee got close but no cigar. So did a comparative plodder like Ibn Bey.

If it’s an infuriating quandary for the raiders to crack, it suits the home team just fine. The Breeders’ Cup encourages rather forced comparisons to the Ryder Cup in terms of transatlantic rivalry. The reality is that this is an All-American show in terms of focus.

Nevertheless, the impact of getting beaten at their own game in their own backyard would be a blow to the morale of an industry in a US already fighting problems far from confined to the self-defeating use of race-day medication.

So, despite the odds stacked against them, the temptation by Europe’s top bloodstock outfits to fling the dice on dirt continues to seem irresistible. You can see why. Win and the potential trans-code stud career pay-off is immense; lose and the excuse comes pre-packaged.

That appears to be the reasoning behind Roaring Lion’s Classic tilt. The grey has been Europe’s outstanding three-year-old colt of 2018. He had a gruelling race just nine days ago on the Ascot mud. Churchill Downs will be his last start before going to the breeding shed.

His trainer John Gosden began his career in the US, knows dirt realities better than most, and reckons it is the violent kickback thrown into horses faces that is the great test of resolution for dirt first-timers. So Roaring Lion’s likely reaction to it is known only to Roaring Lion.

It will be a more cerebral test for both Mendelssohn and the Godolphin runner Thunder Snow who are both experienced on the surface.

In fact, the Irish hope started one of the Kentucky Derby favourites last May. But he finished last after rain turned dirt to slop, leaving his famously reticent trainer to describe it all as “near-savagery”.

Mendelssohn can run on dirt but he has to be tough to overcome the memory of his spring experience. Thunder Snow has his own memories to banish.

He ran in last year’s Kentucky Derby and hated it so much he started bucking like a bronco after the gate. Locals cackled their appreciation at confirmation of their prejudices of “Yer-peen” dilettantes. A subsequent Dubai World Cup victory means little to Kentucky hard-boots.

The legendary Italian horseman Federico Tesio is perhaps racing’s most famous aphorist. He famously said a horse gallops with his lungs, perseveres with his heart but wins with his character. And beating the Classic odds will require an exceptional equine personality.

1 Australian rugby staring into abyss as another crisis hits
2 Garry Ringrose to stay with Leinster as he signs two-year central contract
3 ‘For 25 minutes I ran out of oxygen’: Pepe Reina on his coronavirus battle
4 Six Nations rugby needs to be protected for terrestrial TV
5 My favourite sporting moment: Game, set and couch as Borg takes down McEnroe
Real news has value SUBSCRIBE