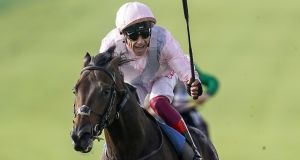 Next year’s classic picture is already dominated by Too Darn Hot although this weekend could help Aidan O’Brien identify some likely opposition to the brilliant Dewhurst winner in 2019.

In the past Britain’s final Group One of the season – the newly titled Vertem Futurity at Doncaster – has identified two future Epsom Derby winners for O’Brien, High Chaparral and Camelot.

Last year Saxon Warrior became O’Brien’s eighth winner of a race formerly known as the Racing Post Trophy, getting the better of Roaring Lion before proceeding to win this season’s 2,000 Guineas.

After Monday’s forfeit stage, the Ballydoyle trainer has eight of the 19 left in the Futurity and significantly almost €20,000 has been paid out to supplement Magna Grecia into the race.

The son of Invincible Spirit was runner up to Persian King in the Autumn Stakes at Newmarket earlier this month on what was just his second career start.

He joins the Beresford Stakes winner Japan and Norway, winner of the Zetland Stakes last time, among Ballydoyle’s contenders.

Charlie Hills’s Phoenix Of Spain, runner-up to Too Darn Hot in last month’s Champagne Stakes, is among the leading home entries along with John Gosden’s Turgenev.

No current trainer has a record to compare to O’Brien’s in the race and the Irishman is closing on the record 10 victories assembled by the late Henry Cecil.

Too Darn Hot is clear favourite for both next year’s 2,000 Guineas and Derby. Japan, a narrow winner of the Beresford Stakes last time, is a 20-1 shot in 2019 Derby betting lists.

However it is another of his stable companions, Broome, who can already boast top-flight form having finished runner up to Royal Marine in the Prix Jean Luc Lagadere on Arc day.

The Group One juvenile focus won’t be confined to Doncaster this weekend as Saturday sees a number of Futurity entries also hold the option of Saturday’s €250,000 Criterium De Saint-Cloud in Paris.

They currently include both Japan and Norway for a mile and a quarter race O’Brien has won four times in the past, including a decade ago with the subsequent Irish Derby hero Fame And Glory.

On Sunday the seven furlong Group One Criterium International takes place at Chantilly after being switched from Longchamp.

O’Brien has won that race on four occasions too, the last with Johannes Vermeer in 2015. All four were colts. But among his current options are the Rockfel winner Just Wonderful, currently favourite for next year’s 1,000 Guineas, and the Fillies Mile runner up, Hermosa.

Dermot Weld enjoyed a Leopardstown hat-trick on Saturday which included a pair of two-year-old winners. That will be encouraging for followers of another Weld juvenile, Baladiya, in the Gowran Park opener on Tuesday.

She missed the break on her Cork debut behind Zagitova on quick ground but as a daughter of Pivotal should appreciate an easier surface now.

Weld’s Flavius landed the Trigo Stakes at the weekend and his half brother Tankerville is an interesting newcomer in an auction maiden while Roccia Bella can repeat a course and distance win last month in a fillies handicap.