Aidan O’Brien has some Magical thinking for Breeders’ Cup Turf 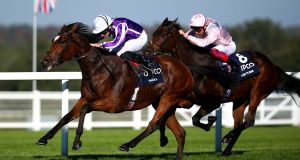 Magical is set to be given the green light to contest the Breeders’ Cup Turf following her Champions Day heroics.

The Aidan O’Brien-trained filly was able to sign off in Europe for the season on the best possible terms after an injury-truncated campaign.

A solid run in the Prix de l’Arc de Triomphe preceded her victory in the British Champions Fillies & Mares Stakes, and she is about to take on the boys once more at Churchill Downs in Kentucky the weekend after next.

“We are thinking she might go to the Turf with Hunting Horn,” said O’Brien.

“She is in good form since Ascot. She showed at Ascot she gets a mile and a half, but she has not done much since.

“Wayne [Lordan] rode her in the Arc and he was delighted with her, because that was her first time over a mile and a half.

“She is a filly that has had an easy enough season, because she has had a few little setbacks.

“We were training her for the Oaks, but she had a setback and missed it. It might be a blessing in disguise she is going into the autumn as a fresh filly.”

Another of O’Brien’s who ran well at Ascot was I Can Fly, who claimed second behind Roaring Lion in the Queen Elizabeth II Stakes and so appeared to book her ticket for the Mile – along with Happily.

O’Brien said: “She seems to be comfortable back at a mile, and good ground and soft ground all comes easy to her.

“Donnacha [O’Brien] was delighted with her the last day.”

So Perfect’s target is undecided, however, and she could yet run in either the Juvenile Fillies’ Turf over a mile or the Juvenile Turf Sprint.

O’Brien added: “We are just discussing which way we want to go with her.

“She is a fast filly as well. It is whether we give her a chance in the mile and find out about her for next year – or to go for the sprint. The lads have not decided what they want to do with her.

“She is a big, powerful, fast filly.”

Derby candidate Anthony Van Dyck looks the pick for Ballydoyle in the Juvenile Turf, rather than Broome, who ran so well at Longchamp.

“At the moment we are looking more at Anthony Van Dyck than Broome running, without having definitely decided,” said O’Brien.

“Broome is in good form and he has had a tough enough season. He has travelled a good bit, but he is a solid enough horse .

“He is the sort of horse we are taking it day by day with. He seems to be in good form.”

Gustav Klimt began the season over a mile, then showed better form dropped to sprinting distances but he may step back up in trip.

“Ryan [Moore] rode him the last day at Longchamp [fourth in the Foret] and he was delighted with him,” said the trainer.

“He felt really well, and we were thinking of going back and giving him another chance at a mile.

“We were only just beaten in the Haydock Sprint Cup the time before last. He is a lovely, balanced horse that travels and quickens well.

“We would love to see what he would do over the mile and we think he would love racing around a bend. Ryan was very happy with him in the Foret – which is really a good sign.”

O’Brien is keen to break new ground, though, and win the Classic for the first time. And more than any of his other runners in the race, Mendelssohn has been prepared specifically for it.

“We think he has progressed with every run since. Ryan was very happy with him on the last day.”

1 GAA players spend just 2.5 seconds within 2m of each other during play
2 LeBron James among those to slam Drew Brees’ anthem comments
3 How a GAA club sprang up in east Belfast over Sunday breakfast
4 Shane Long signs new two-year deal with Southampton
5 ‘Why do you need the money now?’: Schalke apologise for ticket refund questions
Real news has value SUBSCRIBE

Premier League to allow five substitutions per team when games resume 14:34
‘Why do you need the money now?’: Schalke apologise for ticket refund questions 13:50
Shane Long signs new two-year deal with Southampton 12:46
Social distancing takes a back seat as fans return in Hungary 08:58
The East Belfast GAA club set up over breakfast; James and NFL players hit out at Brees comments 07:03
Here is your handy guide to sport on television this week