Call for hunters chase to be included in Dublin Racing Festival 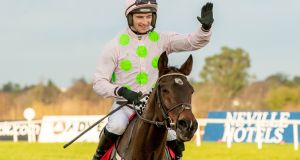 Champion amateur jockey Patrick Mullins has called for the Dublin Racing Festival to include a hunter chase in future.

The amalgamation of Leopardstown’s best races from three previously standalone fixtures into a single weekend of top quality action saw the hunter chase dropped from the programme in 2018.

The race traditionally identified Ireland’s best hopes for the Foxhunters event at Cheltenham and had star names such as Salsify and On The Fringe on its roll of honour. It was run instead at Navan last year when Ucello Conti was successful.

“I think it was a pity to lose the hunters chase. I think it added to the meeting and the race has been lost since,” Mullins said on Monday.

“I think that race brings a different crowd to the races and it’s an important crowd that shouldn’t be left out of a weekend as important as this.

“There’s a hunters chase at the Punchestown festival and that grassroots shouldn’t be forgotten,” he added.

During a Horse Racing Ireland organised media conference on Monday he outlined possible runners for the upcoming festival at Leopardstown from Willie Mullins’s huge team of entries but underlined how precise plans have yet to be made by his father.

Successful in his first race over fences almost a year ago, Cilaos Emery has made light of his inexperience in open company by returning from a 289-day absence to win twice this season.

Mullins admitted the Closutton team aren’t sure how good Cilaos Emery is but suggested the rules governing novice status should be re-examined.

“I think the novice system needs to be looked at. I don’t think it’s fair that a horse can win its Beginners Chase, get injured and then has to run as an open horse the next year.

“I think it should be three runs as a novice regardless of timeframe,” he said.

Mullins also said he anticipates “huge improvement” from Chacun Pour Soi who was beaten on his eagerly anticipated return to action at Leopardstown over Christmas.

“I have noticed we’ve been easier on them than other years. Usually we wouldn’t have run horses unless they were ready to win whereas this year he’s been getting them out quicker.

“It might mean they’ll be a bit fresher at the end of the year,” he commented.

1 Ireland backrow of O’Mahony, Van der Flier and Stander to be retained against England
2 Triple bogey costs Rory McIlroy as Adam Scott prevails at Riviera
3 On healing and wild hurling: The re-education of Diarmuid Lyng
4 Few, if any, have given as much to Munster as Garrett Fitzgerald
5 Solskjaer unable to say if Paul Pogba will play for Manchester United again
Real news has value SUBSCRIBE