Butterscotch primed to deliver at Newmarket 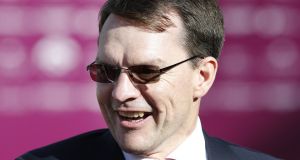 Aidan O’Brien: will be hoping Butterscotch can prove his worth at Newmarket. Photograph: Alan Crowhurst/Getty

Butterscotch might not be one of Aidan O’Brien’s juvenile stars, but she can show she is no slouch in the Shadwell Rockfel Stakes at Newmarket.

The Galileo filly would probably not be ranked alongside the likes of Clemmie or Happily, but she has shown enough on a racecourse to warrant deep respect in this Group Two event over seven furlongs.

Butterscotch’s maiden win at Naas in June was a bit tasty as she breezed five lengths clear of Dawn Hoofer. That form was probably nothing out of the ordinary, but the same cannot be said for her run in the Group Three Grangecon Stud Stakes in July.

She did not win, but there was certainly no disgrace in finishing second to stablemate Clemmie, who is a horse of huge potential and has subsequently claimed Group Two honours at Newmarket.

This appears a decent renewal, but seven furlongs looks cosily within her radar at this stage of her career, while there should also be no issues whatsoever with the Newmarket ground.

Andrew Balding has done a smashing job with Beat The Bank, who is deeply respected in the Shadwell Joel Stakes. The gelded son of Paco Boy has won three of his four starts since his transfer from Ireland and is well worth a shot at this grade.

Even in spite of troubled passage towards the line, Beat The Bank absolutely hosed up in the Group Three Thoroughbred Stakes at Goodwood last month.

The third horse home that day, Forest Ranger, has since finished a close second in the Strensall Stakes at York so the form is reassuringly strong enough.

Beat The Bank takes on a host of chiselled, Pattern-race performances but he gets weight from most of the field and is probably the most interesting horse in the line-up.

Fleur Forsyte looked the real deal at York on her most recent outing and could be the one in the Princess Royal Nayef Stakes. James Fanshawe’s filly has a lovely profile and thrived in the Listed Galtres Stakes on the Knavesmire when she readily accounted for More Mischief by two and a quarter lengths.

Fleur Forsyte appreciate the cut in the ground at York, so any further rainfall would not be a bother.

There is clearly a fair bit more to come from her and this looks a perfect race in which to illustrate the point.

It seems sensible to follow Porchy Party in the big race of the day at Haydock.

Tom Dascombe’s sprinter had the reopposing Mable Lee and Simmy’s Copshop well-cooked on his last start a fortnight ago when he won a heavy-ground Chester nursery by two lengths.

The young son of Dragon Pulse has paid the price as he is now 6lb higher in the weights, but he does look a likeable sort of thoroughbred and clearly handles deep ground. That trait should come in very handy indeed for the five-furlong nursery on Merseyside.

Gerry The Glover can finally arrest a long losing streak when he rocks up at Newcastle. Brian Ellison’s inmate has been a source of frustration for his connections, having failed to find the back of the net since June 2015.

But Gerry The Glover caught the eye over this course and distance a few weeks ago, when he stayed on nicely for third place behind Auspicion, and should now be in a position to seize full advantage of a lenient mark in this one-mile handicap.