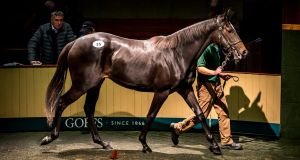 Lot 35, a yearling filly by Galileo, was sold by Godolphin at the Goffs Orby sale in Co Kildare on Tuesday for €1.2 million. Photograph: Goffs

When the hammer fell on Lot 35 at the Goffs Orby sale in Co Kildare on Tuesday, a yearling filly by Galileo changed hands for €1.2 million and a 12-year rift between Europe’s biggest racing and bloodstock operations seemingly drew to a close.

The filly, a daughter of the Group Two winner L’Amour de Ma Vie, was bought to race for Sheikh Mohammed’s Godolphin operation, and the owner’s long-standing boycott of yearlings by stallions which stand at John Magnier’s Coolmore Stud seems to be over – just in time for Europe’s most prestigious bloodstock sale, Tattersalls Book 1, in Newmarket next week.

The cause of the rift between Magnier and Sheikh Mohammed has never been publicly revealed, though any number of theories have circulated since September 2005, when the Sheikh’s team abruptly stopped bidding for the offspring of Coolmore stallions at the high-profile Keeneland sales in Kentucky.

While the Sheikh has since bought horses in training sired by Coolmore stallions, including New Approach, who won the 2008 English Derby in the colours of Princess Haya, his wife, the boycott of Coolmore-sired yearlings was maintained until a few weeks ago, when a handful were purchased in the United States.

Significantly, though, the €1.2 million purchase on Tuesday was the result of a bidding duel between John Gosden, representing Godolphin, and John Magnier’s son, MV Magnier, which carried the eventual selling price into seven figures, more than double the €580,000 paid for the day’s second-top lot.

Magnier and his partners in the Coolmore Stud syndicate, including Michael Tabor and Derrick Smith, are regular buyers of the offspring of their own stallions at the major bloodstock sales, which keeps the market buoyant for breeders while also filling Aidan O’Brien’s racing stable with a fresh generation of potential Classic winners – and future Coolmore stallions – each season.

Coolmore’s grip on the most sought-after bloodlines in racing owes much to the brilliant stallion Sadler’s Wells, who was the leading sire in Ireland and Britain for 13 years running from 1992, and the potency he passed on to his sons Montjeu and, above all, Galileo, the 2001 Derby winner and champion sire in eight of the last nine seasons.

Sheikh Mohammed has spent the dozen years of his boycott adopting a similar policy to that of Magnier and Coolmore, by buying and racing the offspring of his own stallions in the Darley Stud operation, including Dubawi, the runner-up to Galileo in the sires’ table in 2015 and 2016.

The price of avoiding Coolmore’s stallions, however, has been paid on the track. O’Brien has won the Derby six times since 2001, holds the all-time record for victories in Group One races and is on course to set a new record for Group One wins in a single season this year. Sheikh Mohammed, by contrast, has yet to see his own colours cross the line in front in the Derby, while the last trainer to win the British championship solely with Godolphin-owned horses was Saeed bin Suroor in 2004.

Gosden, the champion trainer in 2015, was originally lured home to Britain from America to train for Sheikh Mohammed in 1989, and is now training an increasing number of horses for Godolphin.

Gosden’s growing significance in the operation is underlined by his successful bid for Tuesday’s top lot in Ireland, and follows the sudden resignation of John Ferguson, Godolphin’s chief executive and one of the Sheikh’s longest-serving bloodstock advisors, in June this year following an internal feud with Bin Suroor.

Though he is now within sight of his 70th birthday, Sheikh Mohammed’s will to win on the turf is apparently undiminished. If Godolphin’s purchase on Tuesday truly marks the end of his Coolmore boycott, prices for Europe’s most choicely-bred yearlings at Tattersalls next week could be heading through the roof.