Weld could run Zhukova and ‘Gatsby’ in Turf Classic at Belmont 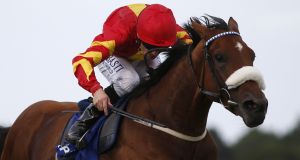 Pat Smullen and Zhukova. Dermot Weld is targeting a return to Belmont for the mare who in May won the Grade One Man O’War Stakes at the track by six lengths. Photograph: Getty Images

Dermot Weld has not ruled out being double-handed in New York on Saturday night, with both Zhukova and The Grey Gatsby in contention to line up for the $500,000 Joe Hirsch Turf Classic.

After taking Zhukova out of the Prix de l’Arc de Triomphe Weld is targeting a return to Belmont for the mare who in May won the Grade One Man O’War Stakes at the track by six lengths.

Saturday’s mile and a half heat is being seriously considered for her, with likely ground conditions at the New York course one factor to consider, but Zhukova has another top-flight option the following weekend.

It was Velazquez who steered Zhukova to her Man O’War victory, and the double Kentucky Derby winning rider could be the ninth jockey to team up with The Grey Gatsby during his lengthy career.

Ryan Moore rode the grey to win both the French Derby and the Irish Champion Stakes in 2014, but the six-year-old has not won in 15 career starts since his memorable defeat of Australia at Leopardstown.

The local team for Saturday night’s Belmont highlight is likely to be headed by the Arlington Million hero Beach Patrol. The only previous Irish winner of the Turf Classic was Aidan O’Brien’s Cape Blanco in 2011.

As expected O’Brien has left in seven horses among the 20 remaining contenders for Sunday’s Arc at Chantilly. The Ballydoyle team is headed by Winter and the older horse stalwarts Highland Reel and Order of St George who filled out the places behind Found last year.

Enable continues to dominate betting for the Arc, and is set to be supplemented into the race on Wednesday at a cost of €120,000. She could renew rivalry on Sunday with Ulysses, who chased her home in July’s King George at Ascot.

The home team is set to be led by the dual-classic winner Brametot and the Aga Khan’s Group One winner Zarak, a son of the 2008 Arc heroine Zarkava.

Willie Mullins has overseas ambitions on the flat this autumn, with Riven Light and Wicklow Brave already in quarantine ahead of a trip to Australia. Both Max Dynamite and Thomas Hobson are set to join them next week.

He had his jumping hat on Monday, however, helping to launch Leopardstown’s new €1.5 million Dublin Racing Festival scheduled for February 3rd-4th.

The initiative sees Leopardstown’s major National Hunt prizes concentrated into a single weekend, which will be highlighted by the BHP Irish Champion Hurdle and the Unibet Irish Gold Cup.

Both can emerge with winners, but perhaps the most interesting race is the juvenile maiden where Ballydoyle runs three, including Saracen Knight who was third to the new Derby favourite Saxon Warrior on his Curragh debut.