Barry Geraghty returns to action at Navan after shoulder injury 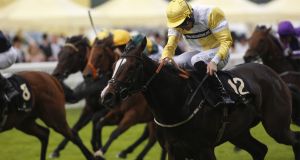 Quiet Reflection won the Commonwealth Cup and the Haydock Sprint Cup in 2016 but reappears with plenty to prove in the Renaissance Stakes. Photograph: Julian Herbert/Getty Images

Aidan O’Brien hasn’t finalised his team for next weekend’s Prix de l’Arc de Triomphe so speculation on the 2018 Derby might seem very premature were it not for the illustrious history of Sunday’s Group Two highlight in identifying future classic winners.

Since Nijinsky almost half a century ago through Assert, Alamshar, Sea The Stars and Capri in 2016, the Juddmonte Beresford Stakes is a proven fount of Derby heroes of various hues.

The Curragh rebuild means it is switched to Naas this year but the odds are little is likely to change with O’Brien heavily favoured to win for a remarkable 17th time in 22 years. He has three of the five runners this time and for punters the picture is muddied by a shuffle of jockey arrangements.

Ryan Moore is on perhaps the most intriguing prospect, Saxon Warrior. The Japanese-bred son of Deep Impact and Maybe looked to have any amount of potential when a surprise debut at the Curragh under Donnacha O’Brien last month.

The trainer’s son switches this time to the Irish Champions Weekend runner -up Kew Gardens while Séamus Heffernan is moved from the latter colt to Delano Roosevelt who Moore rode to finish third in that Leopardstown heat won by Nelson.

If it seems like the Ballydoyle team is feeling its way with some exciting talent that hasn’t stopped bookmakers quoting Saxon Farm at 20-1 for Epsom next June. Delano Roosevelt is twice that in a Derby picture already heavily dominated by O’Brien.

It’s easy to see why considering Saxon Farm is in the reckoning as he looked to catch even those closest to him off-guard with his debut victory, sweeping from the back of the field to win in style. However the runner-up that day has been beaten twice since so the form appears questionable.

Riyazan was fourth in the Leopardstown race won by Nelson while Warm The Voice would be a widely popular winner for his trainer Brendan Duke. The betting value though could be with Delano Roosevelt.

A surprise 14-1 winner himself on his Leopardstown debut, he started favourite for that Leopardstown race and never looked a winner after running very green in the early stages. He was running on noticeably well in the closing stages however and may show the benefit of that experience now.

O’Brien can pick from the quartet of Order Of St George, Winter, Capri and Highland Reel for next Sunday’s Arc and there is a link to last year’s Chantilly heroine Found in the opening maiden at Naas.

Her full brother James Cook makes his debut under Moore in a race where another Ballydoyle newcomer, Cypress Creek, is a full brother to Capri.

Seven cross-channel trained runners are declared for Naas including Juliet Foxtrot who will be ridden by Britain’s champion jockey Jim Crowley in the Group Three CL & MF Weld Park Stakes.

The Juddmonte-owned runner won her maiden by seven lengths on soft ground at Goodwood. However she is faced with some very high class form here, none more so than Mary Tudor’s. She is still a maiden after two starts but held her own with Group One fillies in last month’s Debutante Stakes.

Quiet Reflection won the Commonwealth Cup and the Haydock Sprint Cup in 2016 but reappears with plenty to prove in the Renaissance Stakes.

On her best form Karl Burke’s star could go to next month’s Champion Sprint at Ascot on the back of another victory in a race that may wind up dominated by fillies.

Alphabet belied 50-1 odds to chase home Caravaggio in the Flying Five and the handicapper clearly reckons there was nothing flukey about it as he has hiked her 18lbs in ratings. Nevertheless she still has something to find in bare form terms with Only Mine.

Curragh trainer Darren Bunyan sends his high class sprinter Hit The Bid to Newbury on Saturday for a Group Three where Leigh Roche takes the ride.

Saturday’s home action is over the jumps at Navan where former champion jockey Barry Geraghty returns to action after suffering a hairline fracture in his shoulder blade at Killarney last month.

Geraghty has four rides including Hash Brown for his boss JP McManus in the handicap chase.

Co Kilkenny-based trainer Eoin Doyle could especially enjoy the return of National Hunt racing to Navan. The Winkler is a contender for the handicap chase while the ultra-consistent Fiesole has leading claims in an earlier handicap hurdle.

The Montjeu gelding won two handicap hurdles at Down Royal in May and since then has scored twice on the flat including at Gowran last month. Fiesole appears in the form of his life and his jumps mark is only 6lbs higher than last time he ran over flights.

1 World Rugby study advises removal of reset scrums to reduce Covid-19 risk
2 Ken Early: Liverpool fans, Bamber Gascoigne and a close shave in Istanbul
3 Coming fourth in the Olympics didn’t change this fearless quartet, time did
4 Sideline Cut: Vignette shows why Bird is the true shark in The Last Dance
5 As news gets better, can the pull of The Field be resisted?
Real news has value SUBSCRIBE