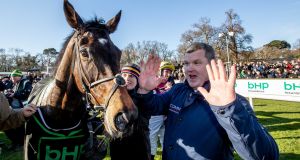 As the billionaire chief executive of one of the world’s biggest airlines, Michael O’Leary is used to making decisions. But the Ryanair boss faces a doozy over what Cheltenham Festival target his star mare Apple’s Jade will go for.

In her first start over the minimum trip for over two years, Apple’s Jade turned the BHP Irish Champion Hurdle into a 16-length rout on Saturday’s opening day of the Dublin Racing Festival at Leopardstown.

It was a 10th career Grade One for a hugely popular animal who became the first mare to win the race in 16 years. She also emulated the legendary Dawn Run, who won the Irish Champion 35 years ago.

Dawn Run went on to land the Champion Hurdle at Cheltenham in 1984. Another Irish mare, Annie Power, did the same three years ago. Apple’s Jade is starting to be mentioned in the same breath as them and after Saturday is as low as 7-4 to emulate them in the Champion Hurdle itself.

That, however, requires a major change of heart by O’Leary and his Gigginstown Stud team.

After Apple’s Jade won over three miles at Christmas O’Leary declared she would get a nose bleed if she ran in a Champion Hurdle. The Stayers’ was acknowledged as a possible option but no secret was made of how regaining the OLBG Mares’ Hurdle crown was the ultimate plan.

Sure enough Apple’s Jade is a heavy odds-on favourite to beat her own sex next month after her latest top-flight triumph.

But the way she pulverised Supasundae at the minimum trip on good to yielding ground means plenty are convinced it will require massive stubbornness from her owner not to make the call to switch.

That O’Leary is famous for intransigence sometimes probably helps explain why Jack Kennedy had barely dismounted in the winner’s enclosure before he and trainer Gordon Elliott came under a heavy barrage of Champion Hurdle questions that often sounded more like statements.

“We’ll get her home and discuss it. We won’t rule anything out. She’s in the Champion Hurdle, the Mares’ Hurdle and she’s in the Stayers’ Hurdle. She could run in any of them,” Elliott volleyed back.

Since the man himself wasn’t at Leopardstown it was left to O’Leary’s brother, Eddie, to face the massed ranks of those pointing out how ducking the Champion Hurdle challenge in favour of the safe Mares’ option might be regarded as lily-livered.

The relish with which O’Leary faced up to this indicates a love of a good argument is clearly a family trait.

“As of now it’s odds-on the Mares’ Hurdle,” he parried at one stage. “Why wouldn’t we when she’s qualified. We don’t have one gelding that’s qualified for the Mares’.”

Eventually he conceded “there is a possibility [of going for the Champion] but only a possibility. We are ruling nothing out.”

Kennedy, for his part, exhibited a level of diplomatic skill at odds with his 19 years when pitched the same quandary.

“It’s up to Gordon and the O’Learys. I’ll be happy to keep the ride,” he said. “She’s unbelievable no matter what trip it is and she makes very good horses look ordinary. She’s special, the best hurdler I’ve ridden full stop.”

The call looks ultimately to be Michael O’Leary’s. He’s unlikely to look for much advice but won’t be short of it anyway.

With the reigning dual-Champion Hurdler Buveur D’air winning at Sandown a little later on Saturday, he and Apple’s Jade dominate the top of the championship betting.

Should they tackle each other it would provide a classic head-to-head scenario, not just in Anglo-Irish terms but a male-female element too, not to mention the intriguing prospect of jump racing’s most powerful owners, O’Leary and JP McManus, taking each other on.

Maybe that might yet wind up tipping the balance in favour of ambition for the famously competitive Ryanair boss.

It was Elliott who emerged as a central figure throughout Saturday’s action, saddling three winners, including the Grade Two bumper winner Envoi Allen, but also another Grade One success for Gigginstown in the opening Lacy Partners Novice Hurdle.

After midweek fears about the cold weather snap there was an irony in how low sun resulted in the final obstacles being bypassed in the first five races. For the final two contests the second last fence was omitted.

None of it proved a problem to Commander Of Fleet (13-2) who was half a length too good for the McManus-owned Rhinestone in the opener.

“He was out in the middle of the track with no running rail. He was very green, ducking and diving,” Elliott said before indicating the Albert Bartlett will be a Cheltenham Festival target. Commander Of Fleet was cut to 9-1 for that three-mile contest.

Min duly landed 4-9 odds in the Grade One Ladbrokes Chase for Willie Mullins and Ruby Walsh.

It turned into a fateful contest though as the former Champion Chase hero Special Tiara sustained fatal injuries after breaking down on the flat before the first fence.

Both De Bromhead and Terence O’Brien withdrew their runners from the Frank Ward Arkle Chase due to the going, which was officially good.

Joseph O’Brien’s Le Richebourg beat his stable companion Us And Them in the St Stephen’s Day Grade One feature at Christmas and it was the same result this time with the 11-10 proving seven lengths superior.

“It was a very good round of jumping. Fences and nice ground are important to him,” O’Brien said.”We’ll see how he comes out of it but the Arkle now would make a lot of sense. It’s going to be an even bigger test and they’ll probably go even faster.”

Some bookmaker reaction was to cut Le Richebourg to 9-2 favouritism for the Arkle at Cheltenham.

It completed a double for McManus and jockey Mark Walsh who had earlier brought Off You Go through late to win the Ladbrokes Hurdle for a second year running. McManus’s colours filled the frame in the valuable handicap with the veteran Jezki Runner and Ivanovich Gorbatov third.

A crowd of 12,544 attended the first day of the festival, approximately 1,500 down on last year’s crowd.

Officials at Leopardstown will hold an 8am precautionary course inspection due to a forecast of overnight frost on the east coast.