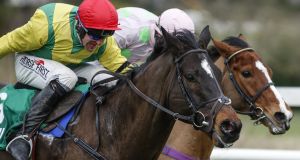 Ground conditions mean some big names miss out on this weekend’s Dublin Racing Festival although for many at Leopardstown on Saturday Apple’s Jade will still be the biggest draw of all.

The Gordon Elliott-trained mare is one of a massive team of horses carrying the colours of Ryanair boss Michael O’Leary’s Gigginstown Stud in eight Grade One races over Saturday and Sunday.

It’s an indication of how even a €1.8 million showpiece event like Leopardstown’s gets inevitably viewed through the perspective of next month’s Cheltenham festival. It’s a perspective behind Apple’s Jade’s appearance in the €175,000 BHP Irish Champion Hurdle as well.

The Gigginstown team are anxious to keep their remarkable mare busy in between a Christmas start and Cheltenham, something they didn’t do in 2018 when Apple’s Jade ultimately lost her OLBG Mares Hurdle crown at the festival.

It’s a busier schedule that means a first start in well over two years at the minimum two mile trip. But proof of both Apple’s Jade exceptional talent and status is how despite that she’s likely to start favourite to gain the tenth Grade One success of her career.

Lining up against her are three other O’Leary runners, including the 2017 winner Petit Mouchoir, as well as last year’s winner Supasundae and Willie Mullins’s hope, Melon.

The latter is a 10-1 third favourite to go one better than his second to Buveur D’Air in last year’s Champion at Cheltenham.

So should Apple’s Jade do what to him over two miles on quick going what she has done to everything else at longer trips this season then the clamour for her to line up in the Champion Hurdle next month will get even more strident.

Both O’Leary and Elliott have repeatedly dismissed such speculation, insisting her targets are confined to the Mares race or the Stayers Hurdle, even though Apple’s Jade remains among the Champion entries.

However should she win impressively and if, less than half an hour later, Buveur D’Air fails to impress at Sandown, then the Champion Hurdle picture may wind up changing dramatically.

O’Leary’s dismissive response to that might be to point out the dangers of everyone getting ahead of themselves. After all his one-time great white hope Samcro is still in the Champion too after a season that has proved testament to the dangers of thinking too far ahead.

However Apple’s Jade is drawing comparisons to other top mares of the past like Annie Power and even Dawn Run who won Saturday’s race all of 35 years ago. She is also rated as being in the form of her life, and if Melon does prove her greatest threat it’s easy to argue he actually has more to prove than she does.

Given the stop-start nature of much of this winter’s action, time to prove Cheltenham credentials is rapidly running out for some of the country’s most promising novices.

Battleoverdoyen’s absence from the opening Lacy & Partners Novice Hurdle certainly looks to open things up and Mullins is represented in force by five runners.

The uncertain feel to the race is reflected perhaps in Ruby Walsh opting to ride Relegate, a move that will have surprised some. One of her stable companions, Come To Me, was well behind Battleoverdoyen at Naas last month but was found to be coughing afterwards. Paul Townend’s mount could step up significantly on that.

Forecast overnight frost prompted Leopardstown’s authorities into re-jigging the race order and putting the steeplechases to the back of the card.

With Cheltenham in mind some might take reassurance from how it might shape as business as usual in terms of both Mullins and Elliott dominating the programme.

Min will be a major fancy in Footpad’s absence to repeat last year’s success in the newly-promoted Grade One Ladbrokes Chase while another Mullins hope, Uradel, can score in a handicap hurdle.

It will be disappointing if Apple’s Jade’s stable companion Envoi Allen can’t maintain his unbeaten bumper record and another stable mate, Mengli Khan, with Jack Kennedy back on board, can upset Le Richebourg in the Arkle.