PPE, testing and contact tracing will cost well over €1bn for the year, says Paul Reid

The HSE faces an annual bill of €1 billion for personal protective equipment (PPE) for health workers and a “similar very significant cost” to establish a testing and tracing system. 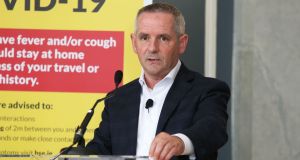 HSE chief executive Paul Reid: cost of testing and tracing will be ‘at a scale that nobody could have foreseen’. Photograph: Leon Farrell/Photocall Ireland/PA

The State faces a “massive” healthcare bill running to well in excess of €1 billion to pay for the long-term battle against the Covid-19 pandemic, Health Service Executive chief executive Paul Reid has warned.

The HSE faces an annual bill of €1 billion for personal protective equipment (PPE) for health workers and a “similar very significant cost” to establish a testing and tracing system to find infected contacts of new cases in order to release the country from pandemic restrictions, Mr Reid said.

The State will require a “future model” of testing and tracing beyond the “war-time model” set up in the past 10 weeks in response to the outbreak of the deadly virus, he added.

The death toll from coronavirus rose by a further 12 reported fatalities on Sunday to 1,458. This was the lowest daily total since March 30th.

A further 236 people were diagnosed with the disease, bringing total confirmed cases to 22,996.

Mr Reid said at the HSE’s weekly briefing that testing and tracing were “two key enablers” to “unlocking society” and the cost would be “at a scale that nobody could have foreseen”.

“The trade-off of not investing in this is the cost to society either through increased transmission of the disease or further restrictions which have a cost as well.

“It is still going through Government at the minute and we are still working through some of the issues around the costings and the ongoing fixed cost of what’s involved,” Mr Reid said.

The Department of Public Expenditure and Reform has to sign-off on the plan and is examining costs based on levels of demand for the remainder of the year, said a senior health source.

The HSE planned to introduce a 24-hour turnaround target to trace and inform the contacts of any newly infected people from this week, a spokeswoman for the service said.

This would be reduced from an average of 36 hours currently for a “non-complex case” and would apply to about 80 per cent of all newly confirmed Covid-19 cases.

“To get to the point of being able to contact someone in a truly timely fashion, there is still work to be done. It’s not timely enough yet,” said Mary Codd, an epidemiology professor at UCD.

The nursing homes regulator, the Health Information and Quality Authority (Hiqa), has urged State health officials to start discussions on a plan to reopen nursing homes to visitors as one home operator warned that elderly residents would “die of loneliness” rather than Covid-19, according to Hiqa deputy chief inspector Susan Cliffe.

In a further development, The Irish Times has established there have been postmortem examinations on the remains of just five people who died from confirmed Covid-19.