We will also have to lift the restrictions in our minds

When will we feel safe to return to our economic and social lives? 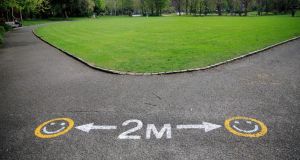 The lifting of Government restrictions is the lesser part of the battle which lies ahead to rescue much of the economy – it is the restrictions in all our heads which are going to be much more important.

Of course it will matter when exactly your local shop, hairdresser or restaurant will reopen, but the real question is when you will be happy to go back in the door. When will you feel it is safe to do so?

In some ways this is an obvious point, but it has got a bit lost in the debate about lifting the restrictions, which has been framed as a trade-off between health and wealth – between safeguarding the public and the economy. In fact, many businesses are now worrying that even when they can reopen, customers may not return, or at least not in enough numbers to make them viable.

There has been a push on the Government to set down the road map to reopening. But recent work by the behavioural research experts at the Economic and Social Research Institute, designed to test consumer sentiment, shows that a comfortable majority of people remain cautious and nervous.

We knew that the restrictions were not all going to be lifted at once, but the cautious mood and the commitment by the vast majority to stay within the rules up to now is striking. And it matters for what happens next.

Businesses will in time reopen, determined by the timetable and metrics set down by the Government. The big manufacturers and construction sites should get back up and running okay, albeit facing a world where demand at home and abroad has collapsed and will only slowly recover. Big service firms – accountants, lawyers and the tech sector – face an uncertain pipeline of future work. Much of the economy will go through a recalibration, as wages fall in many areas, jobs are cut and prices – in some areas like rents and house prices at least – fall.

But what of the smaller customer-facing Irish business – the clothes retailer, the gym, the hairdresser, the hotel or restaurant? Work by Ibec chief economist Gerard Brady suggests that many of these would need to see footfall of about 80 per cent of normal to make it worth their while to reopen.

Otherwise the sums don’t just add up. This will leave many facing unpalatable choices – reopen with fewer staff and try to tick over, stay shut or accept a loss at the start in the hope that things pick up.

The Government has recognised this need for support, beyond what has happened already with the wage subsidy scheme. Helping the SME sector will be central and complex – many urgently need cash and just letting them reopen is not going to fix things.

Perhaps the consumer mood will lift slowly in the months ahead. Behavioural economists talk of people having different approaches to risk – some will rush back to their favourite restaurant as soon as it reopens, others will stay at home, for a while at least. The grim news of the last six weeks has biased consumers toward caution – it is very hard to know how quickly this will change.

Talk of the possible need for second or subsequent shutdowns will not help. Progress on treatments, a vaccine or just evidence that the virus remains under control might. It is hard to see an early tipping point which would make most of us feel relaxed when we are out and about.

Part of the problem is the unknown – we still don’t know the real risk of catching the virus in various settings, for example. We won’t be fighting to buy drinks in a crowded bar any time soon. But would you go on a “staycation” later this year? Under what circumstances would you get your hair cut? What criteria will you use to decide what restaurant you will eat in? On such decisions many businesses will stand or fall.

We are heading into a strange period where shops, restaurants and other places people gather such as gyms differentiate themselves not on price or deals, but on their cleaning regimes, or the fact the staff temperatures are taken every day, or they are “the best” at social distancing.

Subtle words may slip into marketing campaigns, like in the the 1980s and 1990s when building societies used to boast about “confidentiality” when they really meant they would’t tell the Revenue Commissioners about your money. Words such as “spacious” could take on a whole new connotation in advertising a restaurant or hotel.

It will be good for a shop to have friendly and helpful staff, but perhaps more important to have ones that wear masks and don’t crowd you as you arrive. A Skoda car dealership was on the RTÉ news during the week, talking about how cars will be extensively cleaned before they are returned after a service.

And as well as the uncertainty for business owners about people coming in the door, there is the cost of gearing up to operate in this new world through putting in place queueing regimes, rules on how many people can be on their premises, cleaning and so on. It is not only customers who have to be safeguarded, but also staff, who must be happy that they are returning to an environment which is as safe as possible.

The real challenge in getting Ireland going in the months ahead will not be the exact timing of when various restrictions are lifted. A few weeks one way or another on will matter a lot less than when we feel safe to return to our economic and social lives. And talk of a “new normal” is a bit misleading: it won’t feel like any kind of normal – for a while anyway.