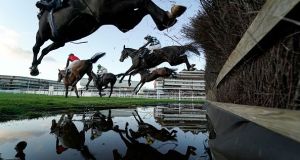 Under a provisional plan Newbury’s Lockinge Stakes would be run on the last weekend of May in a programme alongside the Dante Stakes and the Musidora Stakes. Photograph: Getty Images

Britain’s racing authorities have said it is “likely” that no overseas based runners - including from Ireland - will be allowed run there for the rest of this month should the sport get a green light to resume behind closed doors from the British government.

Under a “best case scenario planning” proposal outlined on Friday by Britain’s pattern committee, Irish based runners are set to be excluded from racing there during May, including in a series of rearranged black type races.

They include the prestigious Group One Lockinge Stakes which was won by the Aidan O’Brien trained Rhododendron two years ago.

No date has been set for a resumption of racing in Britain but the pattern committee there has drawn up a provisional black type programme as part of an overall revamped fixture list.

A statement released through the British Horseracing Authority stressed their best case scenario plans aimed to rescue a number of lost pattern events from the early part of the spring and stage them during the second half of this month and early June.

Under the provisional plan the last two weekends of May are set to feature a re-jigged series of valuable black type races that may not take place at their traditional venues.

That includes Newbury’s Lockinge Stakes which would be run on the last weekend of May in a programme alongside the Dante Stakes and the Musidora Stakes.

However the statement said: “It is likely that racing will be restricted to domestic runners only, initially at least until May 30th, in line with a similar approach taken by other international racing jurisdictions.

“France has confirmed that no foreign runners will be permitted until June 1st with Germany last night extending its restriction on foreign runners until at least May 31st from May 22nd.”

Travel restrictions are part of the measures being implemented on the continent to enable racing to resume behind closed doors there.

Although there are hopes in France that they could be lifted to allowed international runners line up in their first classics on June 1st, the British proposal doesn’t rule out such a ban being extended there if necessary.

That could have a major impact on Irish based horses, particularly in relation to the Guineas races at Newmarket which will be run in just over a month under the new proposals.

Ireland’s champion trainer Aidan O’Brien expressed concern last month about the prospect of ‘domestic only’ classics being run in Europe this year due to the Covid-19 pandemic.

“The whole pattern race system is all based on competition between all the countries and always has been.

“We support races all over Europe all the time and I think for the pattern committee, and the races, it’s probably vital that it stays open,” he said.

Friday’s plans also outline how Ascot would still be scheduled to take place in its existing slot starting on June 16th, with the Epsom Derby and Oaks held in early July.

However the impact of the coronavrius emergency is reflected in a long list of valuable and prestigious races that will be abandoned under the new plan.

Under the new programme, as well as the Guineas races, the first weekend in June would also see the Coronation Cup being run, separate from its traditional date during the Derby festival at Epsom.