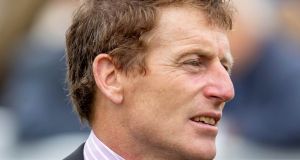 Like many within racing Johnny Murtagh is in the dark as to when the sport will be able to resume in Ireland.

However the renowned former champion jockey and current trainer said on Monday he would like to know “one way or the other” if racing can begin later month or not until the end of June.

Under the Government’s five-phase ‘Roadmap for Reopening Society & Business’ no sport behind closed doors will be allowed until June 29th at the earliest.

Racing comes under the brief of the Department of Agriculture and Horse Racing Ireland is reportedly lobbying for the sport to come back in an earlier phase, possibly even the first stage on May 18th. There was no comment from HRI on the matter on Monday.

A resumption of racing in France has moved closer with the head of France Galop announcing that Paris police had approved the running of a meeting at Longchamp next Monday.

With hopes apparently increasing in Britain of a resumption of racing there too – possibly as early as Friday week – fears have already been expressed that Ireland will be left behind if unable to race again until nearly July.

“One way or the other you’d love to know. Then you could tell owners and everybody else. Everybody wants to know whether it is June 29th or May 18th.

“I always had it in my head that we would know by May 5th. That’s tomorrow so I’m hoping everybody will be in the know by then,” Murtagh said from his Curragh base.

“We’re after getting horses ready for the end of March. We were told then the middle of May. We’ve got them ready for now. We’re ready to go. But one way or the other you’d just like to know.

“When I heard the Taoiseach speak the other day I thought that’s it. But now people are saying we could be back in May. But why are they saying that? Is there a reason for saying that? I’m waiting for tomorrow to know where we stand,” he added.

Earlier the France Galop president Edouard De Rothschild tweeted: “We obtained and received from the Prefecture of Police in Paris authorisation to resume racing on May 11. This is great news and a real victory!”

De Rothschild added that the plan remains to resume racing in France on all the major racetracks including those in Paris.

The prestigious Longchamp course is set to host a Classic trials card on Monday including four Group races.

The first Classics of the French season, the 1,000 and 2,000 Guineas, have been pushed back to June 1st although it is unclear if overseas horses will be allowed take part. Racing in France is planned to be ‘domestic only’ through May.

As a result the Andre Fabre-trained pair ,Victor Ludorum and Earthlight, dominate ante-post betting for the French 2,000 Guineas, the Poule D’Essai Des Poulains, with most firms.