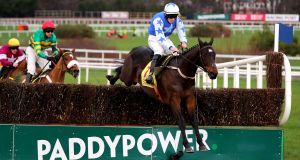 Kemboy and Road To Respect are among 13 horses still in contention for the Unibet Irish Gold Cup at Leopardstown on Sunday.

The Willie Mullins-trained Kemboy ran out an impressive winner of the Savills Chase over the course and distance in December, dominating from the front under an inspired ride from David Mullins.

The champion trainer initially indicated he could send Kemboy straight to the Cheltenham Gold Cup in March, but he retains the option of returning to Foxrock this weekend.

Mullins also has Savills Chase fourth Bellshill, Al Boum Photo and Total Recall in the mix for a race he has won on a record nine occasions.

Noel Meade’s Road To Respect was a hot favourite to successfully defend his crown in the Savills Chase, but had to make do with minor honours in third after stumbling twice at a crucial stage.

He is likely to spearhead a strong team for Gigginstown House Stud on Sunday, with Gordon Elliott’s pair Alpha Des Obeaux and Outlander and the Henry de Bromhead-trained Balko Des Flos all left in.

De Bromhead could also call upon Savills Chase runner-up Monalee, while Noble Endeavor and The Storyteller complete a quartet of Elliott inmates.

Elliott’s brilliant mare is unbeaten in three starts so far this season, but all were over further and she has not run over two miles since being beaten a nose by Irving in the Fighting Fifth Hurdle at Newcastle in November 2016.

Her last outing was in the Christmas Hurdle over three miles on this course which she won by 26 lengths.

Elliott has also left in Tombstone and Farclas.

Completing the sextet is the Willie Mullins-trained Melon, who was fourth to stable companion Sharjah in the Ryanair Hurdle over the course and distance last month on his first outing since falling three out in the Punchestown Champion Hurdle won by Supasundae in April.