Trainer and jockey have each won the oldest Classic six times 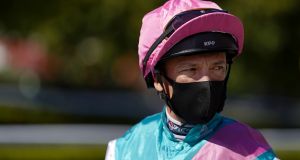 Frankie Dettori and Aidan O’Brien have each already won the Pertemps St Leger on six occasions and will combine to try and make it seven at Doncaster on Saturday.

Dettori has been snapped up by O’Brien for the Irish Derby winner Santiago, part of a three-pronged Ballydoyle attack on the world’s oldest Classic.

The Derby-winning jockeys Pádraig Beggy and Emmet McNamara will team up for Dawn Patrol and Mythical respectively after a dozen Leger hopefuls were declared on Thursday.

The Willie Muir-trained Pyledriver shaded Santiago in initial betting on the race which will also see O’Brien’s son Joseph try to complete a rare Leger double with Galileo Chrome.

The former champion jockey was on board the 2013 winner Leading Light, a year after a bitter defeat of the Triple-Crown seeking Camelot by Encke.

Champion apprentice Shane Crosse will try to make his presence felt in an English Classic on the progressive Galileo Chrome who goes to Doncaster in preference to Sunday’s Irish Leger at the Curragh.

Another rising young Irish star of the weighroom, Andrew Slattery, will also make his Leger debut on the outsider Sunchart, trained by his father, Andy.

In contrast the Leger is very familiar ground for Dettori who first won it a quarter of a century ago on board Classic Cliche.

It is 15 years since the Italian superstar and O’Brien previously combined to win with Scorpion.

Santiago was a disappointing third to Dettori’s star stayer Stradivarius in the Goodwood Cup on his last start but O’Brien anticipates better now.

“Goodwood didn’t work as we would have liked. We usually like to take our time on him but he hit the gates on Ryan [Moore] and he couldn’t really get him back,” said the trainer.

“He was sitting in that second position and Ryan felt he was probably in a gear too high all the way.

“Because of that he went from travelling very well to having to drop him and ask him to go and race very quick. He really didn’t get his breath to go again.

“We had to give him a little bit of an easy time after it because obviously when things don’t go smooth for a horse they usually have a harder race but he seems in good form again.”

One of the final Leger declarations, English King, is more likely to take up an option in the following day’s Grand Prix de Paris at Longchamp.

Before that, on Friday, a trio of Irish trainers – Johnny Murtagh, Michael O’Callaghan and Ger Lyons – take aim at the Group Two Flying Childers Stakes at Doncaster.

Frenetic (Lyons) and Measure Of Magic (Murtagh) were behind Miss Amulet at Naas last month.

O’Callaghan’s Steel Bull, an impressive winner of the Molecomb Stakes at Goodwood, had a less happy experience next time in the Phoenix Stakes.

Steel Bull had to have three teeth removed after banging his head in the stalls prior to the race.

On Saturday Murtagh will try and secure a maiden Group One win in his training career when he saddles both Know It All and Champers Elysees in the Coolmore Matron Stakes.

Know It All will be ridden by a rising star of the cross-channel weighroom, Cieren Fallon, son of Murtagh’s old jockey rival, Kieren Fallon. The progressive Champers Elysees is ridden by Colin Keane.

“Know It All is in very good form,” Murtagh reported. “She ran very well in the Prix Rothschild [in Deauville], she was third [less than a length behind the winner Watch Me.]

“The plan was always to come back for the Matron. She’s fresh, she’s well. She’s the best horse we’ve had in the stable. I thought, if we had a good horse this year, it was her.

“This year has gone smoothly for her. Her first run was nice, she won a Group Three [at Leopardstown] next time. So all guns blazing towards the Matron.”

Donnacha O’Brien has already struck at the top level as a trainer this season thanks to Fancy Blue in both the French Oaks and the Nassau.

Fancy Blue just edges her old rival Peaceful as a 15-8 favourite for the Matron this weekend.

“Fancy Blue starts out on her autumn campaign in the Matron and while the trip might not be ideal, she does have good form over a mile and she ran well in the Irish Guineas over this distance,” said the trainer.

1 Gordon D’Arcy: Saracens showed again they have the template of how to beat Leinster
2 Born to ride, born to win: Sam Bennett, the making of a green machine
3 Trump in the rough over playing golf and US Covid-19 fatalities
4 A kick in the teeth for sports, and a nail in the coffin for communities
5 Different Strokes: Bryson DeChambeau wants to go further
Real news has value SUBSCRIBE