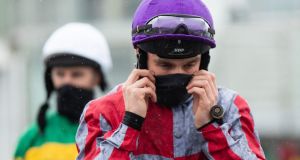 Irish racing’s regulatory body has opened an investigation into a breach of the coronavirus raceday protocols by jump jockey Kevin Brouder at Galway on Monday.

Brouder has admitted to having wrongfully gained an admission wrist-band for a passenger travelling with him.

In an enquiry at Galway, Horse Racing Ireland’s Covid-19 officer reported that Brouder had carried out correct screening procedures before gaining admission to the racecourse.

However the jockey quickly returned to the entrance area “claiming to have lost his wrist band and seeking a replacement band which he was given by the Irish Horseracing Regulatory Board security officer.”

HRI’s Frank Lannon said that at a later stage a passenger was observed in Brouder’s car within the enclosures and in possession of a wrist band.

The passenger confirmed she had not received health screening clearance for the fixture.

The IHRB’s security officer, Declan Buckley, told the enquiry he had spoken with Brouder who admitted he had “wrongfully” claimed an admission wrist band for his passenger and had brought her into the enclosure area.

Brouder admitted what he had done to the stewards on Monday and confirmed he was in possession of two wrist bands, neither of which was mislaid.

The matter has been referred to the IHRB’s chief executive Denis Egan for further investigation.

On Tuesday and IHRB spokesman said he hoped the matter can be dealt with as soon as possible.

It is the latest breach of raceday protocols that have been in place since racing resumed behind closed doors on June 8th.

Later that month trainer Emmet Mullins was fined €5,000 and banned from accessing any racecourse for three months after an incident at Leopardstown.

Both Aidan O’Brien and his son Donnacha were fined €2,500 and suspended from attending race meetings for two weeks after breaching protocols at the Curragh on Irish 2,000 Guineas day.

Sarah Bermingham, an authorised representative of trainer Enda Bolger, was fined €150 and prohibited from entering a racecourse for a month after accessing Bellewstown in July without the necessary requirements.

Brouder, 22, and originally from Listowel in Co Kerry, made a memorable impact on last February’s Dublin Racing Festival with a big-race double on Thosedaysaregone and Treacysenniscorthy.

His two brothers, Gearoid and Gavin, are also jockeys. He has ridden six winners in the current jumps season.

In other news Aidan O’Brien’s Epsom Derby winner Serpentine has been installed an 11-8 favourite by one firm for this Sunday’s Juddmonte Grand Prix de Paris.

Although local interest will be on Irish Champions Weekend, Serpentine’s long awaited reappearance since his shock all the way Derby success under Emmet McNamara looks like taking place at Longchamp.

He is one of four Ballydoyle entries among the 11 horses left in the mile and a half Group One on Tuesday. The other three are Mogul, the Irish Derby runner-up Tiger Moth and Nobel Prize.