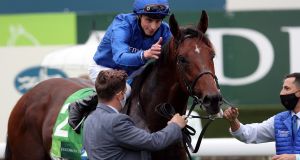 The Irish Champions Weekend has got its headline act with the world’s top-rated racehorse Ghaiyyath committed to Saturday’s Irish Champion Stakes at Leopardstown.

Godolphin’s star, officially rated 130 after his Juddmonte International victory at York last month, will face a handful of opponents in the €750,000 feature of this weekend’s €3.6 million extravaganza.

They include a trio of Aidan O’Brien-trained hopefuls including last year’s winner Magical.

However, O’Brien’s number one jockey Ryan Moore, who rode Magical in a Ballydoyle clean-sweep of last year’s race, has opted to team up with her stable companion Japan this time.

The English rider also gave this weekend’s bumper big-race event a timely boost when O’Brien confirmed on Thursday that Moore will be on duty at the Curragh on Sunday.

Even the likely return to action of the surprise Epsom Derby hero Serpentine in Longchamp on Sunday doesn’t see Moore making a French switch.

Serpentine, who was ridden to a stunning 25-1 success under Emmet McNamara at Epsom in July, is set to be joined in the €360,000 Grand Prix de Paris by both Mogul and Nobel Prize.

“We have three French jockeys booked for it, [Christophe] Soumillon, [Mickael] Barzalona and [Pierre-Charles] Boudot, but we haven’t decided yet who will ride what,” O’Brien said. “We will see how they go when they have a blow out in the morning.”

Moore’s presence on Japan rather than Magical has both Ballydoyle stars disputing second-favouritism for the Irish Champion behind Ghaiyyath who is as short as 4-6 with some firms.

O’Brien insisted that Moore was always going to be on board the colt rather than the mare despite Japan’s disappointing effort behind Enable in the King George.

“He was sore on both front feet afterwards. We had to take the shoes off him and he was barefoot for 10 days. It settled down and we were able to shoe him again, get him back to work and so far everything has gone according to plan,” the champion trainer said.

With prize money for Champions Weekend cut by €1 million, and what is designed to be a public shop-window for the sport having to take place behind closed doors due to the coronavirus pandemic, Godolphin’s decision to send Ghaiyyath is an important morale boost for the event.

Any lingering doubts about him skipping the trip to Ireland were banished when he was declared on Thursday morning alongside another international star, last year’s French Derby winner Sottsass.

William Buick will team up again with Ghaiyyath but Colin Keane has been engaged by Jean-Claude Rouget to ride Sottsass.

“He travels to Ireland at the peak of his career, unbeaten in four starts this year, three of them Group Ones, two of which were officially rated the best performances globally in 2020.

“He’s now a five-year-old and by any standards he is lightly rated. He has run only 12 times, winning nine and placing twice. This is his fourth season in training and I believe what we are seeing now is an outstanding racehorse at the top of his game,” he said.

“He’s going in as good a condition as we have ever had him. I’m as pleased with him as I was before the Juddmonte where I thought he was very professional in the manner he went about everything,” he added.

Saturday’s other Group One, the Coolmore Matron Stakes, will see Moore team up with Donnacha O’Brien’s Fancy Blue for the big race sponsors rather than a trio of Ballydoyle hopes topped by Peaceful.