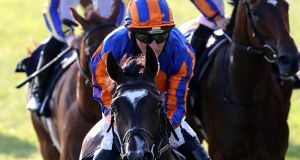 It will be a unique behind-closed-doors Royal Ascot this week but what remains the same is how Aidan O’Brien is favourite to be leading trainer there once again.

Fresh from another classic success with Peaceful in Saturday’s Tattersalls Irish 1,000 Guineas, O’Brien is a short as 11-10 to be top trainer at Ascot for a sixth year in a row.

That run of dominance includes a record-equalling haul of seven winners in 2016 while last year Ireland’s champion trainer emerged on top with five victories.

O’Brien has half a dozen runners set to line up on Tuesday’s opening day and they include Circus Maximus in the Queen Anne Stakes.

Sergei Prokofiev takes his chance in the other opening day Group One, the Kings Stand Stakes, while the potential Epsom Derby contender Mogul is on course for the King Edward VII Stakes.

On Wednesday, O’Brien’s dual-Group One winner Japan is favourite for the Prince of Wales’s Stakes.

Due to coronavirus, the shape of the renowned five-day extravaganza has been radically revamped with six extra races added and a revised running order.

Both the Coronation Stakes and the St James’s Palace Stakes have been moved to Saturday’s final day to create as big a gap as possible from the Newmarket Guineas.

With the Epsom Derby and Oaks moved to July 4th, the King Edward and the Ribblesdale Stakes are now trials and take place on Tuesday.

The two-year-old programme has also been adjusted with the Windsor Castle Stakes on Wednesday, the Chesham on Thursday and the Norfolk and Albany Stakes on Friday. The Queen Mary and the Coventry take place on the final day.

O’Brien, who has been leading trainer 10 times in all, and saddled 70 Royal Ascot winners in total, hasn’t ruled out Peaceful from a quick reappearance in the Coronation Stakes.

The daughter of Galileo gave O’Brien a ninth Irish 1,000 Guineas victory at the weekend when leading home a remarkable family clean-sweep.

Peaceful was two lengths too good for Fancy Blue, trained by O’Brien’s son, Donnacha, while the winner’s stable companion, So Wonderful, was third. O’Brien’s other son, Joseph, saddled the fourth, New York Girl.

The race turned into a milestone for Coolmore’s all-dominant stallion, Galileo, who sired a world-record 85th individual Group One winner in Peaceful.

The tally overhauls that of the deceased Danehill who was Galileo’s former neighbour at the Co Tipperary stud.

The 14-day self-isolation restriction that applies to anyone entering this country due to Covid-19 means Coolmore’s No 1 jockey Ryan Moore hasn’t ridden in Ireland yet this year.

However, he will be very much in the hot seat at Ascot this week with Japan among a number of prime mounts for O’Brien.

Japan won the Juddmonte International and the Grand Prix de Paris in 2019 and will face half a dozen opponents in Wednesday’s big race.

They include the Australian top-flight winner Addeybb and the John Gosden-trained pair Lord North and Mehdaayih as well as Godolphin’s stalwart Barney Roy.

The six year old was a St James’s Palace hero in 2017 and was retired to stud at the end of that campaign. However, fertility issues meant he was gelded and returned to racing with trainer Charlie Appleby.

He has won three of his five races since then, including a Group One at Meydan on his last start.

“His previous two starts this year were over nine furlongs in Dubai but I’ve always felt that stepping him up in trip would bring about more improvement.

“I know he’s been over the trip before, in the Eclipse and the Juddmonte International, but for me he’s an older and stronger horse than he was then.

“On the back of his two runs this year I think he goes there in good shape and we’re looking forward to going back to Ascot with him,” Appleby said.

1 ‘Embarrassment, anger, sadness’: the decline of the great Stephen Hendry
2 Seán Moran: It won’t take much before cancelling All-Ireland looks like a solution
3 Bundini Brown: The man who invented ‘float like a butterfly, sting like a bee’
4 Different Strokes: Shane Lowry enters last chance saloon
5 Heroic insanity: When Michael Dunlop raced home in memory of his father
Real news has value SUBSCRIBE