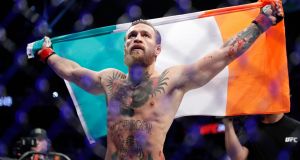 It might have only lasted 40 seconds, but Conor McGregor’s rip-roaring return to the UFC octagon has opened up a treasure trove of opportunities that would have seemed impossible just a few short months ago.

Without a win in over three years, McGregor had been written off as he spiralled out of control, but for his fight against Donald Cerrone he found the focus and the fire that would propel him back to his best.

The 31-year-old now has his pick of lucrative fights across two weight classes as well as a return to professional boxing lurking in the background. Whatever he decides to do will make him one of Ireland’s richest athletes even richer.

Put aside the fact that Cerrone was hopelessly out of his depth – the Irishman’s improvisation and precision with his striking showcased the rebirth of the McGregor we thought no longer existed.

With the hype train back in full swing, this win will stick in the craw of many who feel that he has not atoned for his publicly recounted sins outside the cage, nor has he even confronted many of them in any meaningful way.

The crowd who roared him on at the T-Mobile Arena may not all have forgiven him, but they certainly seemed prepared to forget as he made his triumphant return.

Whatever about his “new man” persona, he is back to his old, frightening self in the cage.

In a sport which prides itself on pitching the best against the best and never allowing fighters to pad their records by facing stiffs, Cerrone was doomed from the outset.

There is no doubt the UFC cut McGregor some slack in putting him up against a game yet limited opponent, but even they couldn’t have foreseen just how quickly and brutally the fight would end.

Though boasting a slew of UFC records and a wealth of experience, the 36-year-old American was in jeopardy from the off. Despite seemingly getting the advantage by forcing a clinch, Cerrone found himself having to deal with McGregor shouldering him in the face, a technique that was as unorthodox as it was brutally effective.

When they broke, blood was pouring from Cerrone’s nose, but McGregor was still keen to give a taste of his own medicine.

Famed for his devastating kicks to the head, ‘Cowboy’ found himself reeling as McGregor’s foot connected flush with his jaw, hastening the end of the fight.

“I saw he was susceptible to the head kick also. I know he was looking to land that on me, but I wanted to land it on him,” McGregor said after the bout.

Not too long after that kick landed, Cowboy was being comforted by his team as McGregor enjoyed his first taste of victory in over three years.

His joy stood in stark contrast to the last fight he had in this arena 15 months previously, when Khabib Nurmagomedov choked him out before an ugly brawl broke out in the aftermath.

The year that followed featured arrests and allegations, court cases and some convictions as the loss of his two belts took its toll on McGregor and he lost his way outside the cage.

The most destructive period in his career was also the least productive in terms of the number of fights he had, but in wanting to keep busy now, he may face a task a lot tougher than Cerrone in his next outing.

UFC president Dana White seems to want the rematch against Nurmagomedov – arguably the toughest option for McGregor – above all else, and though McGregor looked sharper and more focused than he has done in a long time, the Dagestani grappler presents a different challenge.

His primitive, suffocating style is anathema to McGregor’s free-flowing movement and clinical striking, but another fight on the ground would probably end badly for McGregor.

Having said that, McGregor’s striking was nowhere near as crisp and devastatingly effective as it was against Cerrone.

Nurmagomedov is due to defend his lightweight title against Tony Ferguson on April 18th in Brooklyn, but given how many times this proposed match-up has failed to happen in the past, it would be no surprise to see McGregor booked in as a replacement.

There is also the possibility of a welterweight bout with Jorge Masvidal and a trilogy fight with Nate Diaz. McGregor has also made no secret of his desire to box both Manny Pacquaio and Floyd Mayweather, fights that could make him even richer.

Whoever he chooses to face, we can expect to see him back in the cage or the boxing ring sooner rather than later. He barely broke sweat against Cerrone as he emerged unscathed and feasibly able to fight again at short notice, but regardless of who he faces next, McGregor has shot back to the top of the combat sports pile.

The short striking masterclass he put on at UFC 246 has provided more fuel for future videos showcasing his devastating abilities, and his new-found humility has won him back many of the fans he recently lost. The more highlight-reel finishes he can produce, the faster the more unsavoury elements of his recent past will fade into the background.

As his coaches, family and friends streamed in to hear him speak at the press conference that rounded off this chilly Las Vegas night, McGregor had already formed his thoughts about his future.

“Who is next doesn’t matter, the when is more interesting,” he explained.

“The whole world lights up when I fight, so I want to get back out there again. Soon enough, we’ll see what happens.”

1 TV View: Roy Keane but Daragh’s keener as Late Late fails to shoot the lights out
2 Ireland Slam England at the Gardens to open up Grand ambitions
3 ‘Manchester United are lucky to have you’: Klopp responds to Donegal schoolboy’s letter
4 Solskjær backs Martial to get 20 goals for Manchester United for first time
5 Six Nations: Ireland v England all you need to know guide
Real news has value SUBSCRIBE